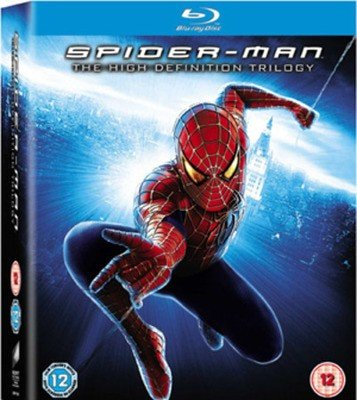 In Spider-man, high school student Peter Parker gets bitten by a genetically modified spider whilst on a school trip to a University laboratory. Overnight Peter develops supernatural powers and extreme strength. At first he uses his new talents for his own material gain but Peter eventually comes to the conclusion that he must use his new found abilities to fight evil as the super-hero Spider-Man.

In Spider-man 2, Peter Parker is having problems with his double life as the superhero Spider-Man and as things get worse he decides never to be Spider-Man again. It's only when the scientist Dr Otto Octavius becomes deformed in a freak accident into Dr Octopus that he realises that only Spider-Man can stop him.

In Spider-man 3, the webbed superhero and his girlfriend, Mary Jane, get embroiled in a love triangle while he is forced to confront a new slate of dastardly villains and a power that changes his very personality.
PostTweetShare Share with WhatsApp Share with Messenger
Community Updates
Music Magpie DealsMusic Magpie Discount Codes
If you click through or buy, retailers may pay hotukdeals some money, but this never affects which deals get posted. Find more info in our FAQs and About Us page.
New Comment Subscribe Save for later
7 Comments
31st Dec 2019
Brill deal.ordered many times from here on used products without any problems.heat.
31st Dec 2019
Might wanna add that it's the Tobey Maguire set (which is my favourite).
31st Dec 2019
Pizza time!
31st Dec 2019

Might wanna add that it's the Tobey Maguire set (which is my favourite).

I think Tobey was a great Spider-Man, just like Hugh Jackman was wolverine.
31st Dec 2019
First and second ones were good, the third one was a mess. Story idiotic, and ruined the whole Spider man back story. Made villain Sandman a "sympathetic character" when he was just pure nasty in the comics, (done a few times this in recent comics movies - the latest being the Skrulls are nice - complete opposite of comics) Raimi himself said the story kept being changed by execs, ruining his own ideas (he was supposed to do Mysterio and Vulture in the fourth)
1st Jan

Might wanna add that it's the Tobey Maguire set (which is my favourite).

Hmm, considering Toby has the only Trilogy. Maybe not so needed
1st Jan
Better than the new terrible WOKE versions