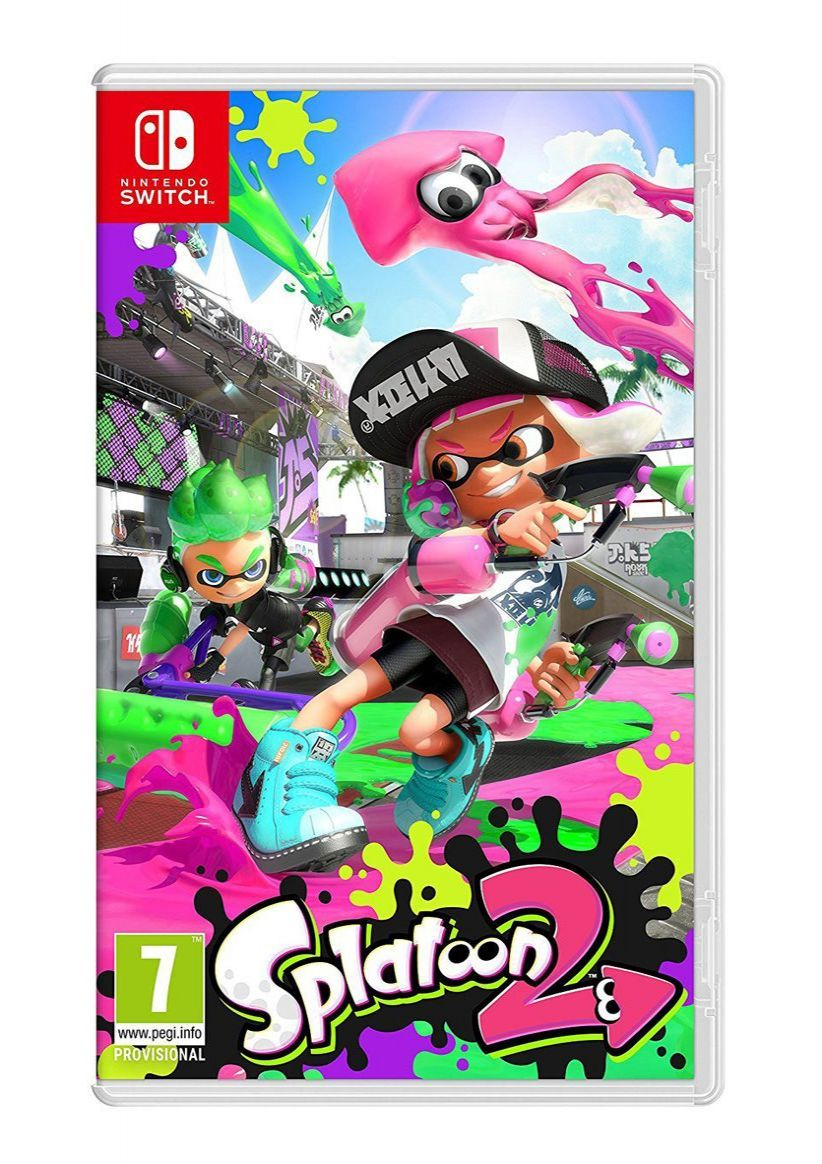 I think this is the best price I've seen for a physical copy of Splatoon 2 so far.
Might be low stock clearance as per usual with Simply Games.

Ink-splatting action is back and fresher than ever

Get hyped for the sequel to the hit game about splatting ink and claiming turf, as the squid-like Inklings return in a colorful and chaotic 4 vs. 4 action shooter. For the first time, take Turf War battles on-the-go via local multiplayer in portable play styles. You can also compete in frenetic online matches like before. Two years have passed since the release of Splatoon, and two years have also passed in the game world, leading to an evolution in fashion trends and new styles of weapons and gear. Staying fresh never looked so good.

New weapons – New dual-wielding Splat Dualies join the action, complete with a new Dodge Roll move. Mainstays like the Splat Roller and Splat Charger have also been remixed to include new gameplay mechanics and brand-new special weapons.
Local and Online Multiplayer – In a first for the series, compete in local multiplayer Turf War battles, whether in TV mode or on-the-go in handheld or tabletop modes. Online battles also make a return.

New ways to play – Play using the Joy-Con controllers or the Nintendo Switch Pro Controller, both of which allow for gyro controls for better aiming and control.
New Trends – Two years have passed since the release of Splatoon in real life, and two years have also passed in the game world. Some familiar characters return under different circumstances, and new characters are introduced as well.
Fresh Updates - Similar to Splatoon for Wii U, updates will roll out post-launch, adding new content.

Smart Device Support – An upcoming smart-phone application for the Nintendo Switch system will enhance matchmaking and allow for voice chat options.
Turf War – Iconic 4 vs. 4 Turf War battles return. The goal is to splat ink on as much territory as possible, while strategically submerging yourself in your team's colors and blasting your enemies.

New stages, new fashions and new weapons
Players can compete on the TV or on the go
Using the Nintendo Switch Pro Controller (sold separately) or Joy-Con, players can aim their ink using motion controls
Supports local and online multiplayer
Compatible with the Nintendo Switch only
PostTweetShare Share with WhatsApp Share with Messenger
Community Updates
Simply Games DealsSimply Games voucher
New Comment Subscribe Save for later
13 Comments
13th Jan
Is an online account essential for playing this game or is there a stand alone 1 player version included?

There is single player too. Online account is mandatory for online multiplayer.
Edited by: "yomanation" 13th Jan
13th Jan
Is the game showing its age and overpriced at this point?
13th Jan

Is the game showing its age and overpriced at this point?

The game is still fun, but expect no further content.

They only provided 2 years of content and that timeframe is already over.
13th Jan

Is the game showing its age and overpriced at this point?

Well, it's a Nintendo first party title - you ain't going to see it drop much lower than that. On the bright side, they also hold their value very well if you decide to resell on eBay or something. Wouldn't be surprised if you can sell this for 32+ quid used.

As for the game, still worth playing, lots of people playing online.
13th Jan

Trust me you could.. been looking to get this last couple of days and all around £32+ mark on eBay. Heat.
13th Jan
This is really good fun. There is a campaign plus PvE and PvP.
13th Jan

Complete ripoff compared to what you can get on eBay.
13th Jan

Complete ripoff compared to what you can get on eBay.

Their sell prices are extortionate for switch games too. Not surprising that when i took my son into CEX they had so little in store
13th Jan
Admittedly I can't recall ever buying a game from CEX! Their prices are nearly as bad as GAME. They need a competitive retailer.
13th Jan
Top top game
22nd Feb
Back in stock at same price
simplygames.com/p/s…tch