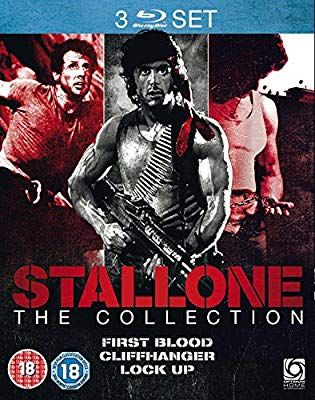 Triple bill of action films starring Sylvester Stallone. In 'First Blood' (1982), the first film in the 'Rambo' series, disturbed Vietnam vet John Rambo (Stallone) spends his days wandering from town to town, searching out his old service colleagues. When he resists a local sheriff's attempts to make him leave town, he is arrested for vagrancy. While in prison Rambo is forced to endure the abuse of a sadistic deputy, until he escapes and takes to the woods, relying on his old army skills to survive. In 'Lock Up' (1989) Frank Leone (Stallone) is serving time in jail for beating up some thugs, and is put through a hellish regime by the prison's governor, Drumgoole (Donald Sutherland). Leone manages to escape and goes to the media to tell his tale of injustice and abuse. He is rewarded by being sent to an 'open' prison to finish his sentence but, six months before his release, he is grabbed in the night, taken to a maximum security prison and reunited with his old enemy. Finally, in 'Cliffhanger' (1993), Gabe Walker (Stallone) is a mountain rescue worker haunted by memories of a friend he failed to rescue, and who perished on the ice peaks. Having quit his job and fled from the mountains, Gabe must return to the scene of his undoing to track down nefarious villain Qualen (John Lithgow), who is searching the snow for stolen money. Things get more complicated with the arrival of Gabe's ex-girlfriend Jessie (Janine Turner).