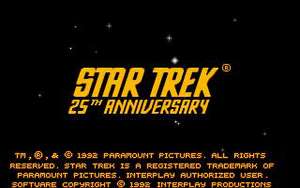 25th Anniversary
Boldly go where no man has gone before...Beam aboard the Starship Enterprise for Interplay's classic adventure game Star Trek: 25th Anniversary! Set during the USS Enterprise's original five year mission to explore strange new worlds and to seek out new life and new civilizations, each of your missions is styled as an episode of an imagined fourth season of the original television series.

Discover and explore new planets, starships and space stations. Control away teams, including Kirk, Bones, Spock, and the occasional, expendable 'Red Shirt' security officer. Use tricorders, communicators, phasers, teleporters and other gadgets to proceed through each mission.The best defense is a strong offense—and I intend to start offending right now.

Captain's Log, Stardate 6238.4. There is no doubt that you are being watched. By whom or by what type of life form is unknown. Even Spock is unable to make sense of the data. The occurrences are just too strange:Is that really an ancient World War I triplane heading straight for you at Warp 9? How can your sensors suddenly detect life forms on a dead planet? Where did that primitive race obtain such advanced technology? No, it couldn't be Dr. Bredell of the Vardaine Science Counsel... he didn't survive your last encounter.

The tension increases as you beam down to mysterious worlds and encounter strange adversaries in logic defying situations.You are a long way from Starfleet Command and only you can discover who - or what - is challenging you beyond your wildest nightmares. OR CAN YOU?

Now it's your turn. Star Trek: Starfleet Academy includes over 25 missions designed to test your ingenuity, leadership and courage -- and determine if you have what it takes to graduate first in your class. Going where no simulator has gone before, you'll take on 30 of the universe's finest starships, from the cloaking Klingon Bird-of-Prey to the Romulan heavy cruiser. To succeed, you must pass all the simulated missions, from simple combat situations, to a recreation of Kirk's near-disastrous confrontation with Khan Noonien Singh, to the infamous Kobayashi Maru scenario. All the while, Captain Kirk (William Shatner), Commander Chekov (Walter Koenig) and Captain Sulu (featuring a special appearance by George Takei), will be there to provide instruction and inspiration!

Every good tactician knows there's a fine balance between speed and raw power. Choose from four classes of ships and over 50 3-D rendered hull designs.

Experience a 30-year campaign that takes you from Lieutenant Commander of a Frigate to a Rear Admiral in control of a task force including Destroyers, Heavy Cruisers and Dreadnoughts.

Challenge yourself with dozens of unique missions created by the Dynaverse engine or re-enact classic scenarios from the Original Series.