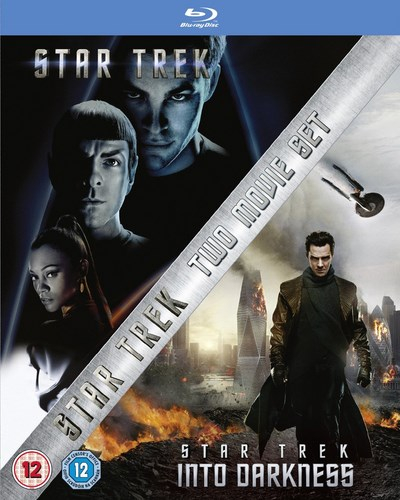 Solid price for the 2 movies from this trilogy which were actually good. 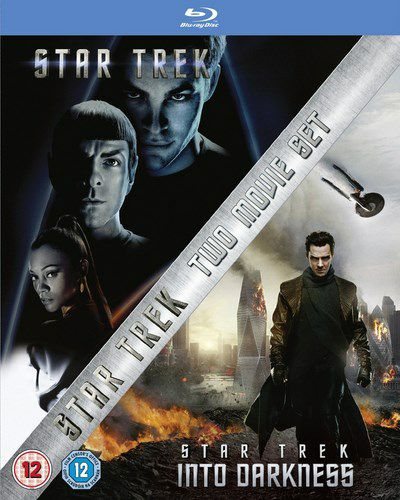 Double-bill of big-budget spin-offs of the classic 1960s sci-fi adventure series created by Gene Roddenberry. In 'Star Trek' (2009), the film chronicles the early years in the life of James T. Kirk (Chris Pine) and his fellow USS Enterprise crew members, including Kirk's enrolment at Starfleet Academy, his first meeting with Spock (Zachary Quinto) and their battles with time-travelling Romulans from the future. Eric Bana, Winona Ryder and Simon Pegg co-star, along with Leonard Nimoy, who reprises his role as the older Spock. In 'Star Trek Into Darkness' (2013), Captain Kirk and the crew of the U.S.S. Enterprise are called back to Earth after a devastating force from within their organisation leaves the planet in chaos and Starfleet in pieces. Determined to settle the score, Kirk embarks on a manhunt with the rest of his crew including Spock, Scotty (Pegg) and Chekov (Anton Yelchin) to find the party responsible before their whole world is laid to waste.
PostTweetShare Share with WhatsApp Share with Messenger
Community Updates
Zoom DealsZoom voucher codes
New Comment Subscribe Save for later
16 Comments
19th Jan
KHAN !!!!!!!!!!!!!!!!!!!!!
19th Jan
Into Darkness....

Compared to the 3rd movie yes but that is just my opinion
19th Jan
Voted hot for the deal.

But I will have to pass. I saw Into Darkness once which was one time too many.
19th Jan
Its £1.50 2nd hand at CEX if they have stock near you but if you want it brand new this is a good price.
19th Jan
Kelvin timeline BS.
19th Jan
£2.89 on ebay if you have already signed up to Zoom
19th Jan
Remember when movie trailers used to have that stupid voice-over with a really deep voice? What the heck was all that about?
20th Jan

Best part is when they cure death for no reason :/
20th Jan
An okay film that tried to copy historical Trek moments... badly.
20th Jan

I think you're thinking of this guy: en.wikipedia.org/wik…ine


Also, Into Darkness and Beyond are both good films. Enjoyed them both, although the first is still the best.
20th Jan
shows as £9.99 for me
20th Jan