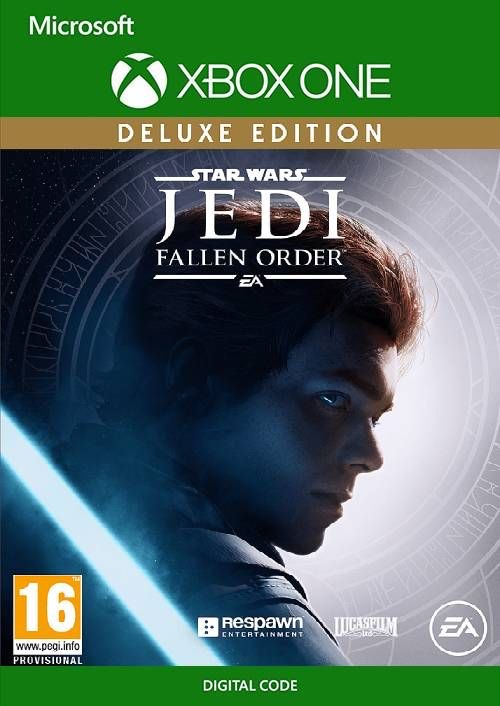 This narratively-driven single player game puts you in the role of a Jedi Padawan who narrowly escaped the purge of Order 66 following the events of Episode 3: Revenge of the Sith.
On a quest to rebuild the Jedi Order, you must pick up the pieces of your shattered past to complete your training, develop new powerful Force abilities, and master the art of the iconic lightsaber - all while staying one step ahead of the Empire and its deadly Inquisitors.
While mastering your abilities, players will engage in cinematically-charged lightsaber and Force combat designed to deliver the kind of intense STAR WARS lightsaber battles as seen in the films.
Players will need to approach enemies strategically, sizing up strengths and weaknesses while cleverly utilizing your Jedi training to overcome your opponents and solve the mysteries that lay in your path.
STAR WARS fans will recognize iconic locations, weapons, gear, and enemies while also meeting a roster of fresh characters, locations, creatures, droids and adversaries new to STAR WARS.
As a Jedi hero-turned-fugitive, players will need to fight for survival while exploring the mysteries of a long-extinct civilization all in an effort to rebuild the remnants of the Jedi Order as the Empire seeks to erase the Jedi completely.
PostTweetShare Share with WhatsApp Share with Messenger
Community Updates
CDKeys DealsCDKeys voucher codes
New Comment Subscribe Save for later
Top comments
1st Feb
Should have bought yesterday when I said I would, now I can't accept paying the extra quid
Edited by: "Darren_Gladwell" 1st Feb
23 Comments
1st Feb
Wasn’t it £24.99!yesterday.
1st Feb

Yup... generally will go back up to a slightly higher price point before it slumps back down again!

Yes it was ‌
1st Feb

£25.99 when you add to basket
1st Feb
Going to complete Shadow Of War (which is an excellent game) and then going for this. Hopefully it will drop to £20 in a few weeks.
1st Feb
Great price.
1st Feb

agreed
1st Feb
Come on £19.99
1st Feb
Should have bought yesterday when I said I would, now I can't accept paying the extra quid
Edited by: "Darren_Gladwell" 1st Feb
1st Feb
PS4?
1st Feb
page still shows £24.99 not checking out until its corrected.
2nd Feb
After all this big wait for everyone wanting it too be £20 it’ll sit on your pile of digital games to play for another year and your say it was alright lol ,na it looks amazing
2nd Feb
Fantastic game. A definite must buy for any Star Wars fan
2nd Feb
2nd Feb
I have this exact code that I tried to sell on eBay yesterday and the guy made a false claim that he didn't make the purchase after I sent him the code. Its been a day and for some reason he hasn't used it (you can check if the code has been redeemed via the xbox redeem code bit).

Not sure if this is the right place to try and sell a code or even how it would work if I did (maybe make an ebay listing?) but would anyone want it for £20? I'm trying to sell it ASAP while its still unredeemed. The person buying it would of course need to redeem it straight away because of this.

If anyone is interested please let me know
2nd Feb

Guessing this is gone, if not drop me a dm and I'll take it
2nd Feb

Guessing this is gone, if not drop me a dm and I'll take it

It says you don't accept messages though so we might have to work something out here? I can set up a listing on eBay or something and link it here if that's the best way?
2nd Feb

Sorry man all on me, should be switched on now
2nd Feb
Is this better than Lego Star Wars III: The Clone Wars?
3rd Feb
Heat for the price, but I was quite disappointed by the game. Good story, frustrating gameplay.