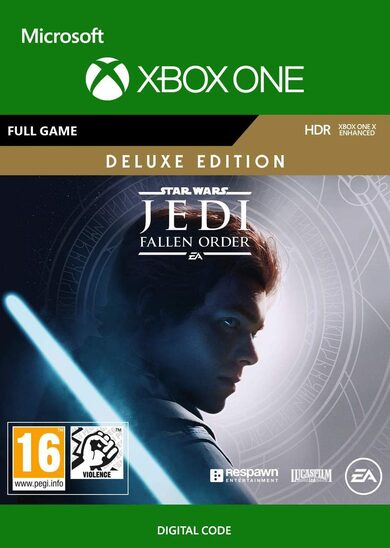 Not sure how many copies this particular seller has but it is a nice saving for those wanting to purchase.


This narratively-driven single player game puts you in the role of a Jedi Padawan who narrowly escaped the purge of Order 66 following the events of Episode 3: Revenge of the Sith.
On a quest to rebuild the Jedi Order, you must pick up the pieces of your shattered past to complete your training, develop new powerful Force abilities, and master the art of the iconic lightsaber - all while staying one step ahead of the Empire and its deadly Inquisitors.
While mastering your abilities, players will engage in cinematically-charged lightsaber and Force combat designed to deliver the kind of intense STAR WARS lightsaber battles as seen in the films.
Players will need to approach enemies strategically, sizing up strengths and weaknesses while cleverly utilizing your Jedi training to overcome your opponents and solve the mysteries that lay in your path.
STAR WARS fans will recognize iconic locations, weapons, gear, and enemies while also meeting a roster of fresh characters, locations, creatures, droids and adversaries new to STAR WARS.
As a Jedi hero-turned-fugitive, players will need to fight for survival while exploring the mysteries of a long-extinct civilization all in an effort to rebuild the remnants of the Jedi Order as the Empire seeks to erase the Jedi completely.
PostTweetShare Share with WhatsApp Share with Messenger
Community Updates
Eneba Deals
New Comment Subscribe Save for later
8 Comments
7th Feb
Lower and Lower you go to the £15 mark! Thats the Bite Point, either that or when it hits EA Access
7th Feb
£10 for me, come on!!
7th Feb
Really enjoyed the game - I got it from cdkeys before Christmas- me and our lad fancied it so game share-split the price
But
Can see why people are waiting as it is sinking quite fast
7th Feb
£23.46 now but it looks like a G2A marketplace is it safe?
7th Feb

Yes it's safe I have made a purchase from them before with no problems
9th Feb
Just tried it right now still works ... thanks!
9th Feb
I'm sure i saw this for £21 on cdkeys about a week ago.
12th Feb
Code not working