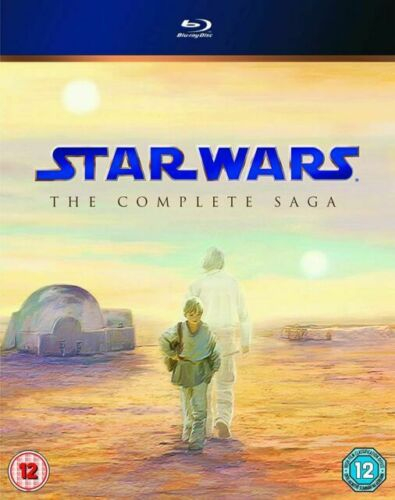 Star Wars: The Complete Saga Ep I-VI Blu-ray
A New Hope / The Empire Strikes Back / Return of The Jedi / The Phantom Manace / Attack of The Clones / Revenge of The Sith
PostTweetShare Share with WhatsApp Share with Messenger
Community Updates
Sallos19
21st May
Product Information

This fantastic collection includes all of George Lucas's STAR WARS films. The most recent epics --THE PHANTOM MENACE, ATTACK OF THE CLONES, and REVENGE OF THE SITH-- serve as prequels to STAR WARS - A NEW HOPE (EPISODE 4), THE EMPIRE STRIKES BACK (EPISODE 5), and RETURN OF THE JEDI (EPISODE 6).
The first of three prequels to George Lucas's celebrated STAR WARS films, EPISODE I - THE PHANTOM MENACE is set some 30 years before the original STAR WARS EPISODE 4 - A NEW HOPE in the era of the Republic. Naboo, a peaceful planet governed by the young but wise Queen Amidala (Natalie Portman), is being threatened by the corrupt Trade Federation, puppets of an evil Sith lord and his terrifying apprentice, Darth Maul (Ray Park). Jedi knights Qui-Gon Jinn (Liam Neeson) and Obi-Wan Kenobi (Ewan McGregor, performing an amazing vocal imitation of Alec Guinness, the older Obi-Wan) are called on to intervene in the trade disputes. Along the way, they acquire an apprentice of their own in the form of young prodigy Anakin Skywalker (Jake Lloyd), or as STAR WARS fans know him, the future Darth Vader. They also encounter Jar Jar Binks (Ahmed Best), a goofy, lizardlike creature who has been banished from his underwater world for clumsiness. When the Trade Federation launches an attack on Naboo, the queen and her allies must battle hordes of robot troopers while Qui-Gon and Obi-Wan face off against the sinister Darth Maul.
In the second installment of the STAR WARS series, EPISODE 2 - ATTACK OF THE CLONES, Anakin Skywalker (Hayden Christensen) is now a teenage Jedi apprentice to Obi-Wan Kenobi (Ewan McGregor). Together they must protect Senator Padme Amidala (Natalie Portman) from a militant group of political activists who are trying to assassinate her. This group is led by the evil Count Dooku (Christopher Lee). But aside from other troubles, Anakin faces some hard choices as he begins to fall in love with Padme, a love that is forbidden by the Jedi knights' creed. In addition, Anakin begins to show his rebellious attraction to the dark side--which will eventually conquer him, when he becomes the future Darth Vader.
In EPISODE 3 - REVENGE OF THE SITH, Anakin Skywalker remains the Jedi apprentice of master Obi-Wan Kenobi. Battling dark forces that threaten the Republic, the duo quickly eliminates enemy Count Dooku, and Anakin proves as he states more than once that his powers have doubled. An intimidating warrior with superior knowledge of the Force, Anakin becomes the pet of Chancellor Palpatine, who is connected to the dark side. Meanwhile, Padme--the senator and former queen who is secretly married to Anakin--is pregnant, and Anakin is tortured by dreams of her dying in childbirth. With Obi-Wan on Utapau battling cyborg General Grievous, and Yoda joining the Wookiees of Kashyyyk, the sage warnings of the Jedi council go unheard by Anakin. His moodiness and glowering are a clear precursor to his inevitable, terrifying metamorphosis into Darth Vader, the dark leader of the evil Empire who haunts the remainder of the series.
The original trilogy concerns events decades later, with STAR WARS - A NEW HOPE finding Princess Leia abducted by the Imperial Forces and rescued by Luke Skywalker and Captain Han Solo. THE EMPIRE STRIKES BACK tells the story of Luke Skywalker, Princess Leia and Captain Han Solo facing an attack by the evil Imperial Forces. Luke escapes to search for Yoda. RETURN OF THE JEDI finds Luke Skywalker on a rescue mission to save Princess Leia and Captain Han Solo from Jabba the Hutt while Luke completes his training with Yoda.
Top comments
26 Comments
Post a comment