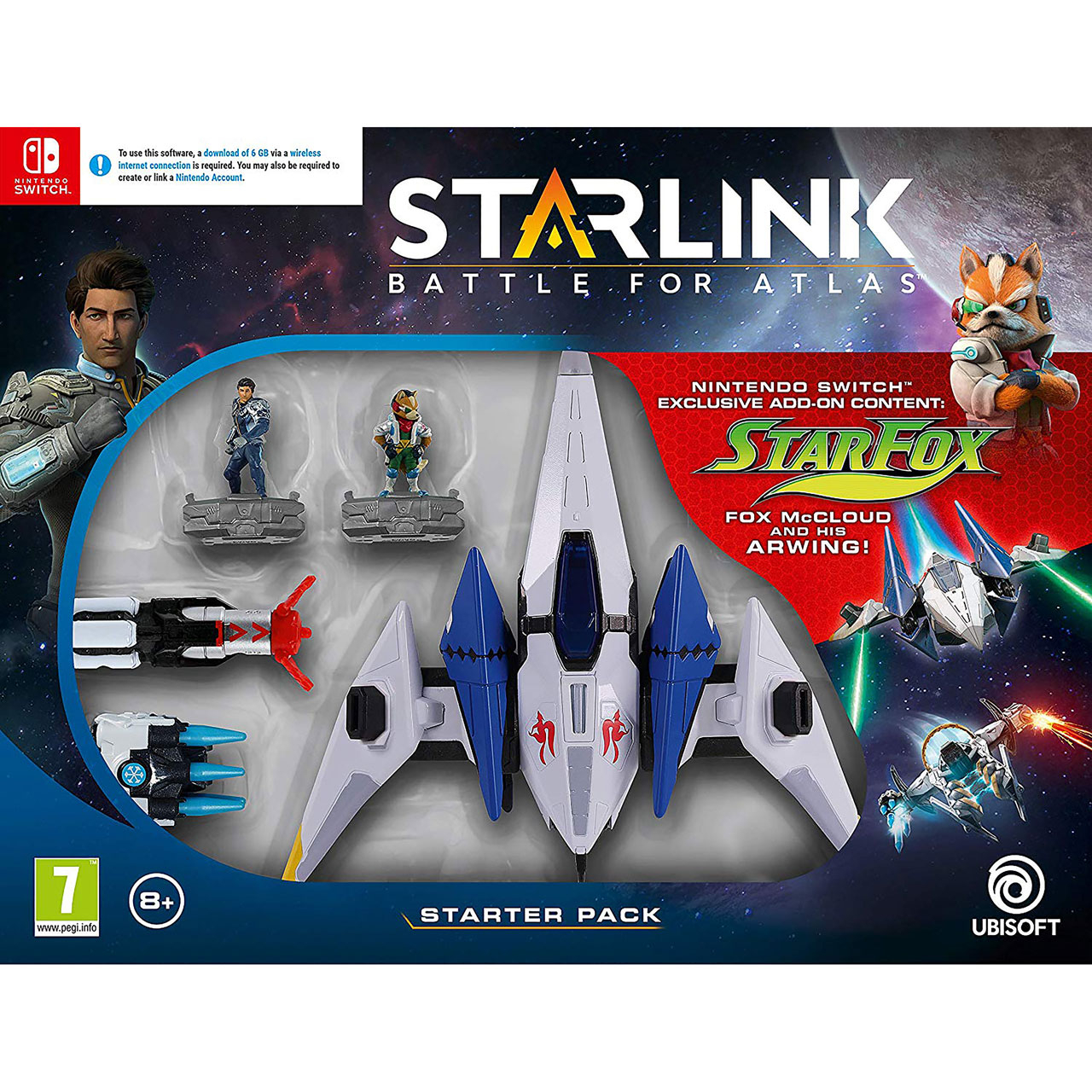 Liberate the Atlas star system from the sinister Forgotten Legion in Starlink: Battle for Atlas on Nintendo Switch. Travel seamlessly from one exotic alien planet, into space, and down onto another again, exploring each world’s unique ecosystem. Lead a team of interstellar pilots to fight back against the threat posed by the villainous Grax and his army. This starter pack includes Fox McCloud and his Arwing from the StarFox series – exclusive to the Nintendo Switch version of the game – as well as the pilot Mason Rana, and the Flamethrower and Frost Barrage weapons. They fix to the controller mount, also included here, and players can swap out the ship, weapons, and pilot with other accessories (sold separately) to give themselves every advantage in game. 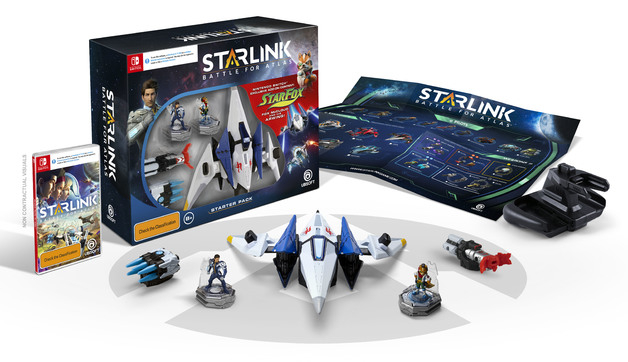 PostTweetShare Share with WhatsApp Share with Messenger
Community Updates
Ao.com DealsAo.com discount code
New Comment SubscribeSave for later
Top comments
3rd Apr
I've been thinking about this and at £9 it's a must
37 Comments
3rd Apr
I've been thinking about this and at £9 it's a must
3rd Apr
Couldn’t resists are £9 ‌ thanks for posting (I think)
3rd Apr
Starfox! This game is at best value on the Switch! Without a doubt, for £9, you're going to get value for money with this. And if you want to build up your collection you can find lots of very cheap additions. Don't be surprised to find a weapon or a pilot for sale in a Poundland
3rd Apr
How long until this one is free?
3rd Apr
I'm not sure why, but I've picked it up. At only £9 I can give it to my son as a little present at some point!!
3rd Apr
A lot of game for £9
3rd Apr
The image above shows a game ‘cartridge’ but the description doesnt mention one so will i get one or not with this? Dont want to order and send to my nephew if its not the game.
Edited by: "zoolander2" 3rd Apr
3rd Apr
Won't let me add to basket - just continually spins. Ordered from Amazon for £1 more (sold by AO)
3rd Apr
Tempted to buy this for the sake of it but not sure it’s worth it even at £9!
3rd Apr

You'll get the game. It's in the box with the ship, the two characters and the controller to dock the ship
3rd Apr

Imo not, I played for about 2 hours and thought it was terrible, never to be picked up again. But clearly some like it, though theres a reason they are virtually giving it away. Though it's not broken like some games just not very good imo.
3rd Apr

Thanks for confirming
3rd Apr
Really couldn't get into this, but the arwing figure is really cool.
3rd Apr
I've completed the Switch version with only the ship and weapons in this starter pack. Absolutely no need to buy additional ships or weapons. Paid £14.99 well worth it IMO.
The Switch version includes the Starfox team in the game and the way the developers have done this makes this the better version. Think of it as a less complicated No Man's Sky
3rd Apr
Nice
3rd Apr

To counterbalance some below, its a fine enough game. £9 is very good, but I would hold off and get it digitally in a sale, personally. its more fun with more ships and weapons, although not necessary.
It's a fairly fun/decent space shooter, flying between planets. It's by no means terrible though, I dont understand that at all, unless you absolutely hate that genre of game. And if you did, why would you buy it in the first place?
3rd Apr
Do you have to play it with the toy stuck to your controller or can you just play it with normal controller?
3rd Apr

No, at least not with the ones included in the starter pack. It knows you have these
3rd Apr

Sorry is that no I don't have to play with toys stuck to the controller or no I can't use the normal controller.
3rd Apr

No you don't have to play with the starter toys that come with this pack stuck to the controller. If you buy extra toys I think you have to.
3rd Apr

Totally is
4th Apr
Reminder you can play the game off cart without using the toys, the base game contains the digital license for the included items.

So if you really wanted too, buy this for the game and pickup some dlc weapon packs in sales on the eshop.
4th Apr
I sense this didn't meet the company's expectations. Seen a few heavy sales of these Starlink products around.

I got this set for my nephew at Christmas. It was very well received but I did pay more than this for it!
4th Apr
Seems like it’s out of stock now, it’s not letting me get through checkout and telling me to remove the item from my basket
4th Apr
Mine has just arrived and I was expecting it tomorrow
4th Apr
Oos
4th Apr
Oos
4th Apr
It’s a good little game! Great value at this price! I completed it (I’m 36!) and my godson has had just as much enjoyment out of it (he’s 7!).
I used Fox and the Arwing the whole time and pretended it was another starfox game!
4th Apr
Oos
4th Apr
Great gamez shame it didn't last.
4th Apr
FYI - if you get this pack you can then simply buy the digital packs for other ships and characters, there are only two physical exclusive ships, razors and levis, unless your collecting them all or you have kids its cheaper buying them digitally when on offer!


In this bundle you get masons ship (top left) and starfoxs ship (bottom left) the two middle ships are the pyhsical exclusives, the others can be bought digitally with their respective pilots. 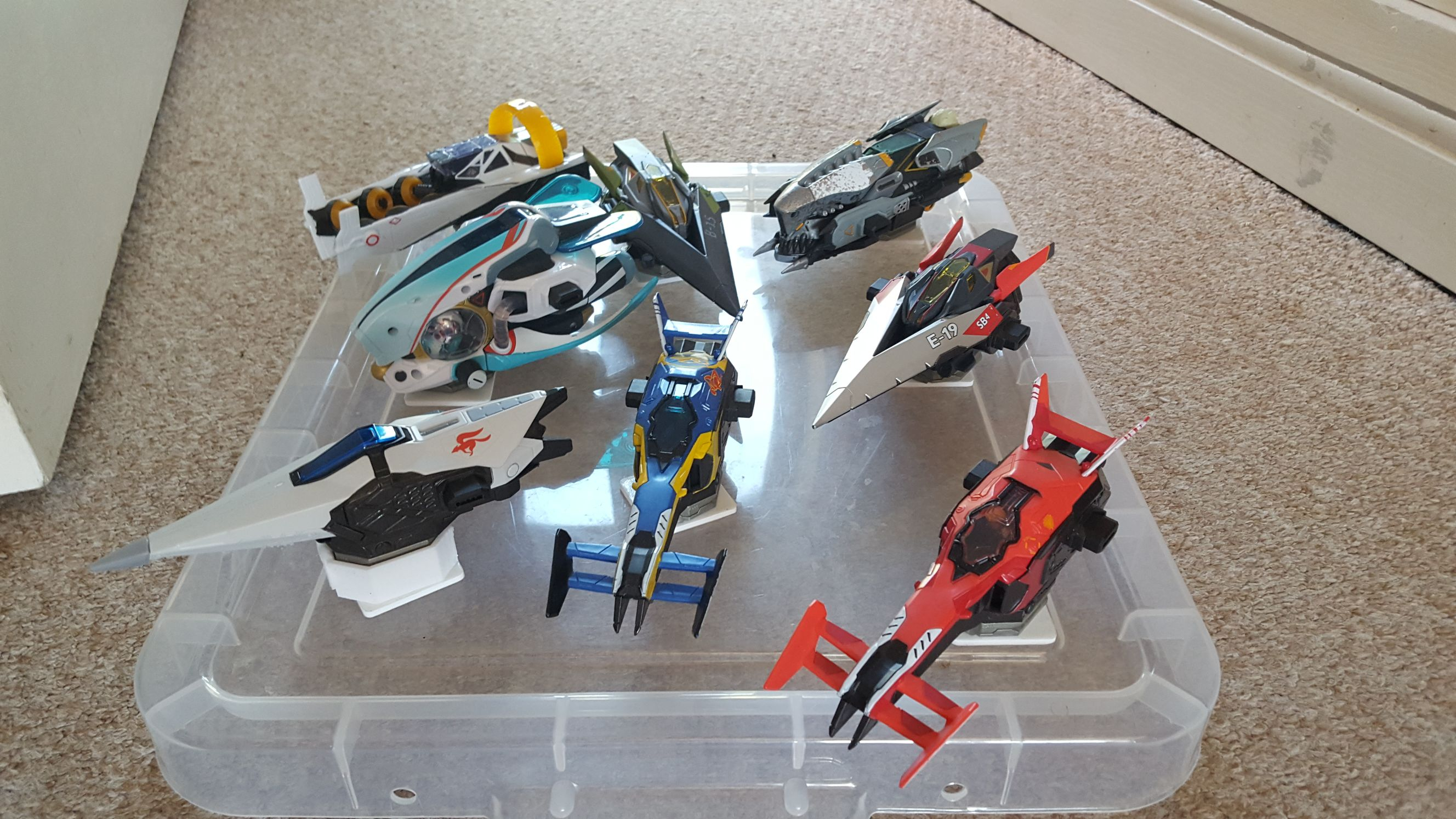 It's actually a really enjoyable game and well worth it if you have any interest in Star Fox or space combat as that element is really the best part, the figures are nice as well particuarly the arwing model though you dont have to use the weird controller set up for the game you can just use a regular controller.
8th Apr
back in stock @mixmixi
8th Apr

Thank you @Chanchi32 appreciate it.
8th Apr
Cold from me they don't deliver to NI
Like so many other So called UK
Companies.
Basically a HGBD, hot Great Britain deal.
Edited by: "malm" 8th Apr
9th Apr