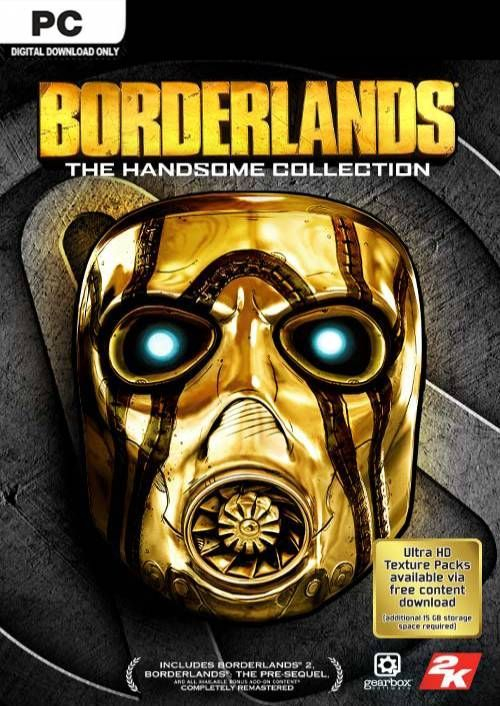 The main difference between the original releases of these games and this collection is the tweaks to resolution and graphics. These features have been updated with the latest technology, so gameplay flows smoothly with no lagging or glitching.

The games still feature all those traits that made them such big hits as standalone games: plenty of loot to be gathered, a quirky streak of humour running through the game, and a certain goofiness that offsets the more serious moments beautifully.

Borderlands 2 recap
The follow-on from the massively successful original game offered all the things that made the first game so good, with improvements to the bits that didn’t work so well, but also with the additions of really good things that you didn’t know you needed until the second game gave them to you!

Working your way across Pandora, you will find that much of the loot that you score is weaponry: but this is a very good thing as the game is gunfight and battle heavy and you will need all the fancy weaponry that you can find. Make sure you check out background items too: you can use the environment as well as your weapons to see off the opposition in the quirkiest ways with a bit of imagination!

When you defeat an enemy, he will drop all his loot and you can grab it all. There is a handy comparison tool so you can see at a glance if your current weapon is better or worse than the one on the ground and decide whether to swap them out or just stash theirs for later.

Borderlands: The Pre-Sequel recap
Produced after Borderlands 2, this game gives us the action before the first couple of games, introducing Jack – villain of the later games – as a hero and following his journey from good guy to villain. His story is told with some sympathy and there is no clichéd beard-twirling, mwahaha evil that overtakes him: something that would make even the most forgiving player roll their eyes!

The game starts off fairly slow with time to look around and explore as you return to get your reward after completing a quest, or get to the next section on the map, but it does pick up the pace until you will be quite glad of that earlier quiet time to explore the terrain and spot ambush points and hiding places from which to ambush villains.

The four playable characters offer a wide range of skills and power-ups and the game will feel very different depending on which character you are using at the time
PostTweetShare Share with WhatsApp Share with Messenger
Community Updates
CDKeys DealsCDKeys voucher codes
If you click through or buy, retailers may pay hotukdeals some money, but this never affects which deals get posted. Find more info in our FAQs and About Us page.
New Comment Subscribe Save for later
2 Comments
29th Nov 2019
Good price - surely everyone has this now though, right? 😁
29th Nov 2019

Good price - surely everyone has this now though, right? 😁

Still worth posting for those that haven't I said the same thing years ago whenever Half-Life or Skyrim appeared for the umpteenth time but people are clearly still buying them.