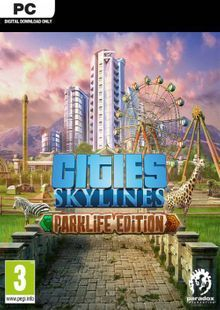 Cities: Skylines PC
Cities: Skylines Parklife DLC
Cities: Skylines is a modern take on the classic city simulation. The game introduces new game play elements to realize the thrill and hardships of creating and maintaining a real city whilst expanding on some well-established tropes of the city building experience.

Heat, it’s a great game, always worth expanding!
11th Apr
Haven't seen the dlc for less than 3.49 so pretty good price for the base game as well.
11th Apr
Is there a big learning curve on this game?
11th Apr

Is there a big learning curve on this game?

Easy to pick up the basics
11th Apr
Also does this run ok on windows 10?
11th Apr

Also does this run ok on windows 10?

Yep. Though check the system requirements, larger cities can struggle a bit on older PCs and laptops
12th Apr

Also does this run ok on windows 10?

You need at least integrated graphics with 2gb memory otherwise it will struggle. It's runs ok on my Ryzen 7 3700 laptop with the integrated Vega 10 graphics but on my other laptop with Intel 620 HD graphics it was not good. Obviously the better the hardware, the smoother it will run.
22nd Apr
Can this be played on Geforce Now?