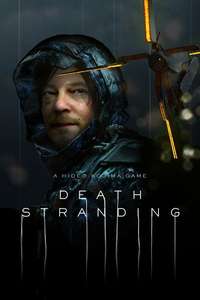 Take on the role of Sam Porter Bridges as you deliver cargo and try to rebuild a fading world after an Earth-shattering apocalypse event. Build connections between people and outposts as you travel post-apocalyptic America, delivering supplies and most importantly; hope.

As you travel the ruins of civilisation you’ll encounter terrifying and challenging enemies, such as the MULEs, a band of rogue porters who want to steal your cargo. Invisible Beached Things (BTs) lurk in the Timefall, a rain which plays havoc with time itself. Succumb to the BTs and you’ll sink deep into another place, another time, the terrifying world known as the Seam. Returning is possible but you’ll damage the world permanently when you do.

It’s not all fear and foes, your Chiral sensor lets you discover the BTs location allowing you a brief moment to escape. In addition you’ll have support from a wide roster of characters, though be warned - not all can be trusted forever.

The all-star cast includes Norman Reedus (The Walking Dead), as Sam Porter Bridges, along with Mads Mikkelsen (Hannibal), Léa Seydoux (Spectre, and Lindsay Wagner (Grey’s Anatomy). You’ll even encounter the likenesses of Guillermo del Toro, the director of Pan’s Labyrinth and Pacific Rim and Nicolas Refn Winding, the director of The Neon Demon and Drive.

Building a network in Death Stranding

You don’t have to traverse the wasteland alone, multiplayer is an integral and subtle part of the Death Stranding experience. When travelling you’ll encounter structures left by other players along with the footprints of their passing. Travel enough and you may forge a new path or build an affinity with another player. It can be lonely out there, but Death Stranding makes sure you know you’re always connected to another person.

This isn’t just a port from PS4, a whole new range of improvements are being added to make sure Death Stranding’s best version is on PC. New resolution and graphics options are being added, along with brand new cosmetics and missions based on the legendary Half-Life series. This means if you want to play Death Stranding at its absolute best, with improved graphics,  frame rates, widescreen monitor support, controls, and more, the Steam version is where the game comes to life.
PostTweetShare Share with WhatsApp Share with Messenger
Community Updates
Top comments
19 Comments
Post a comment