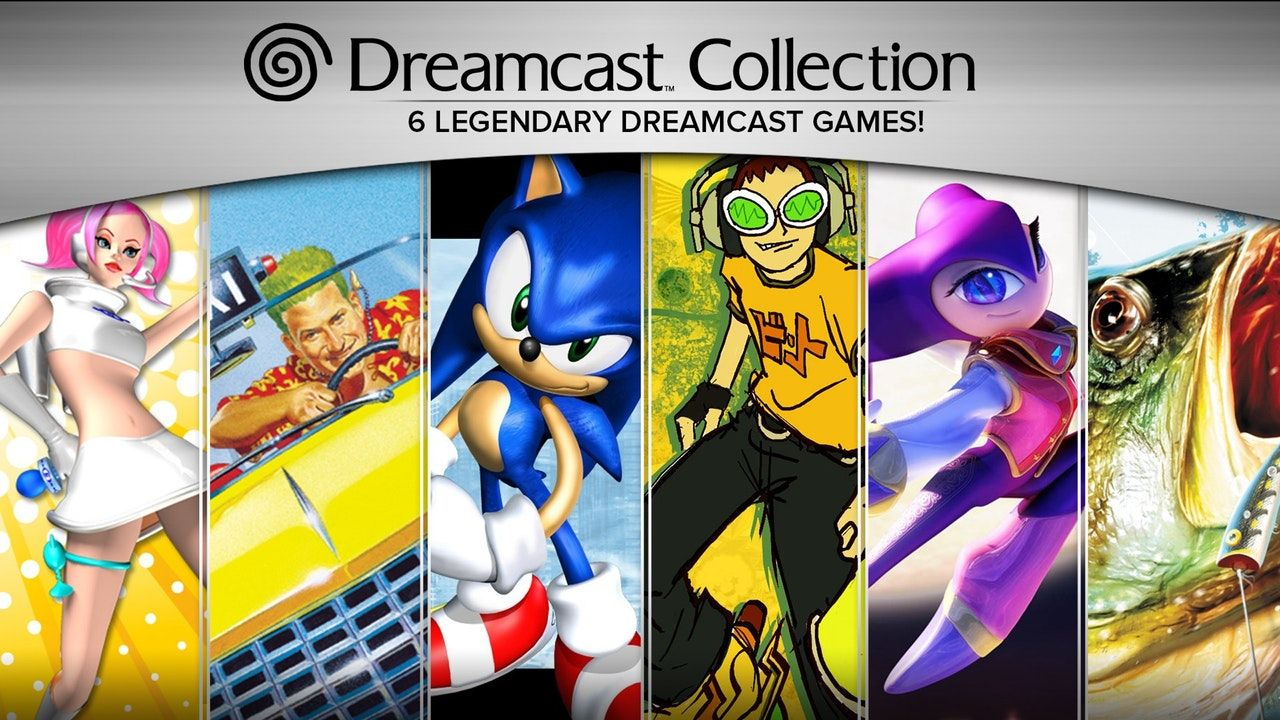 Dreamcast has been given a new lease of life with the SEGA Dreamcast Collection! Classic titles such as the hip Jet Set Radio and the frantic Crazy Taxi reappear, as does Sonic Adventure, SEGA Bass Fishing, NIGHTS Into Dreams and Space Channel 5.

Crazy Taxi
Hey hey, come on over and have some fun with Crrrrrazy Taxi! Barrel through traffic packed streets, hurdle off parking garages, and Crazy Combo your way to Crazy Money in a wild frantic race to scare up the most fares. In Crazy Taxi, time is money, and only the Craziest Cabbies come out victorious.

Jet Set Radio
Tag, grind, and trick to the beat in SEGA’s hit game Jet Set Radio! Fight for control of Tokyo-to, mark your turf with graffiti, tag walls, billboards, and even rival gang members! Perform tricks and flips on magnetically driven in-line skates, but watch out for the local police force!

NiGHTS Into Dreams
Slip off into the dream world and go on an aerial adventure as NiGHTS in this classic Saturn remake. Collect Ideya (colored orbs), rack up points, and battle bosses to help Elliot and Claris save Nightopia from Wizeman the Wicked. With enhanced graphics, achievements, leaderboards, and playable content from Christmas NiGHTS, this beloved title is back and better than ever.

SEGA Bass Fishing
Explore the exciting sport of Bass fishing! Based on the Dreamcast hit, motor out to eight different fishing locations to catch the biggest and baddest Bass possible! Choose between fourteen different lures, and compete in four tournaments. Start off as an amateur, and work your way up to the pros in the Masters Classic tournament. Get hooked!

Sonic Adventure DX
An ancient evil lurking within the Master Emerald has been unleashed from its slumber by the devious Dr. Eggman and is on the verge of becoming the ultimate monster using the 7 Chaos Emeralds. Only Sonic and his friends are heroic enough to put a stop to Dr. Eggman and his evil minions. Hit the ground running in this classic epic adventure in a race against time to save the world!

Space Channel 5: Part 2
Hey there, SpaceCats – meet Ulala, the grooviest reporter in the galaxy! She’s got attitude, and she’s got moves. Help her get the scoop on an unidentified Dance Troupe that has captured thousands of people and is forcing them to dance! Will you be able to free the hostages, and uncover who’s behind the kidnappings all while bustin’ some groovy moves to sweet beats?
PostTweetShare Share with WhatsApp Share with Messenger
Community Updates
Fanatical DealsFanatical Discount Codes
If you click through or buy using any of our links, retailers may pay hotukdeals some money, but this never affects which deals get posted. Find more info in our FAQs and About Us page.
New Comment Subscribe Save for later
4 Comments
20th Dec 2019
shame it doesn't feature Metropolis Street Racer. That pre-dated Project Gotham on Xbox (same developers) all those years ago (20 odd?)
20th Dec 2019
I have the xbox version of Crazy Taxi as I used to love this on Dreamcast but its not got the Offspring soundtrack. Anyone know if this has the original .music?
20th Dec 2019