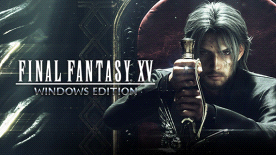 I don't know the expire date but Steam sale finishes on 2nd January. I assume it's the same for GMG so I've set it to that.

Here's some of the official blurb:
Get ready to be at the centre of the ultimate fantasy adventure, now for Windows PC.

Joined by your closest friends on the roadtrip of a lifetime through a breathtaking open world, witness stunning landscapes and encounter larger-than-life beasts on your journey to reclaim your homeland from an unimaginable foe.

In an action-packed battle system, channel the power of your ancestors to warp effortlessly through the air in thrilling combat, and together with your comrades, master the skills of weaponry, magic and team-based attacks.

Now realised with the power of cutting-edge technology for Windows PCs, including support for high-resolution displays and HDR10, the beautiful and carefully-crafted experience of FINAL FANTASY XV can be explored like never before.

FINAL FANTASY XV WINDOWS EDITION
Includes all of the exciting content released as part of continuous game updates (Chapter 13 alternate route, off-road Regalia customisation, character swap feature and more!). And comes with all of content released in the Season Pass - Episode Gladiolus, Episode Prompto, Multiplayer Expansion: Comrades, and Episode Ignis
Get ready to be at the centre of the ultimate fantasy adventure.
PostTweetShare Share with WhatsApp Share with Messenger
Community Updates
Greenman Gaming DealsGreenman Gaming voucher
If you click through or buy, retailers may pay hotukdeals some money, but this never affects which deals get posted. Find more info in our FAQs and About Us page.
New Comment Subscribe Save for later
4 Comments
22nd Dec 2019
Good for the price but Steam version has annoying micro stutters constantly rewgardless system specs. Only solution is to downgrade to version 1.25 and miss out on certain content. So if anyone considers the purchase check refund policy and biew Steam discussions area before hand.
22nd Dec 2019
if you have game pass just wait for a while because these are coming to game pass next year :

Good point. I would certainly have opted for that if I didn't already have the games.
23rd Dec 2019
The Final Fantasy games are coming to Game Pass in chronological order so it'll probably be the end of 2020 when XV is available. I just bought this because I'm not waiting until then.