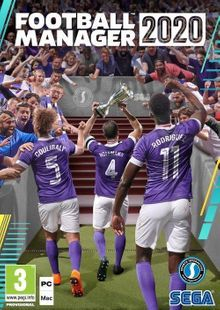 Football Manager 2020 for PC is the latest of the highly popular football team management simulation games on the market. It is the sixteenth in the series of core games: not counting releases for other platforms and special editions.

The game, as with the rest in the series, allows the player to build a football team from scratch, or to take over management of an existing team. The player must use funds wisely, buying good players without spending too much and investing just the right amount into the infrastructures so that facilities are good, and financial reserves remain strong.

With this game, the data is immense: players stats change as they train and advance or even should they get injured, and it is up to you to keep an eye on that, increasing training when fitness falls, but allowing for rest days when injuries begin to mount up. And of course, making sure that rest days do not cost too much!

All your actions are overseen by the board of directors, who will sometimes issue you with challenges and who will be all over any mistakes that you might make to boot, querying why players were given chances that they perhaps did not live up to, or asking why certain players were bought over others. If you do not have good answers, they can make your life quite awkward, interfering with your long term plans!

Tactics, Tactics, Tactics
The game relies, as always, on your abilities to read the data and to draw correct conclusions from the statistics. In this game, you have more information than ever before at your fingertips, meaning that you can very precisely analyse players, teams and your best options for success.

Of course, this means that you must be prepared to put in the work, reading through the information and considering what it means very carefully! Sloppy reading of data can result in sloppy play and lost matches – something certain to have the board breathing down your back in no time at all!

See your tactics and theories put into practise on the field. Once you have strategized and come up with ideas for your teams, it is hugely rewarding to put them into practise and see that you were correct in your surmises.

Use the stats to keep your eyes open for new young players who are the up and coming stars of tomorrow. Every football team ages out eventually, and your dream team of today will be tired and losing their edge tomorrow, with older, less fit, or injured players needing to be switched out for younger, hungrier teammates.

This should work on MAC according to the description on the CDKeys page
Edited by: "thewrecker7477" 21st Feb
21st Feb
Goodbye wife and children.
21st Feb

That's not such a bad thing sometimes
21st Feb

Can anyone confirm if this is defo for MAC too please. Thanks.
21st Feb

Can anyone confirm if this is defo for MAC too please. Thanks.

Yes through Steam it works with Mac and Windows
21st Feb
Thanks
21st Feb
Cheapest its been, do I upgrade from FM19
Edited by: "SultanSaeed" 21st Feb
21st Feb

Cheapest its been, do I upgrade from FM19

Im debating upgrading from FM17
21st Feb
I tried this, it's like being at work, very tedious...
21st Feb

did it work for you?
21st Feb
Will this work on the iPad Pro?
22nd Feb

Will this work on the iPad Pro?

No - PC/MAC only
24th Feb
Just ordered this to use on iMac through steam it was actually 16.99 but I also used Quidco which tracked so will get £1.23 back so total price actually £15.76 which I thinks a great price for such a new game