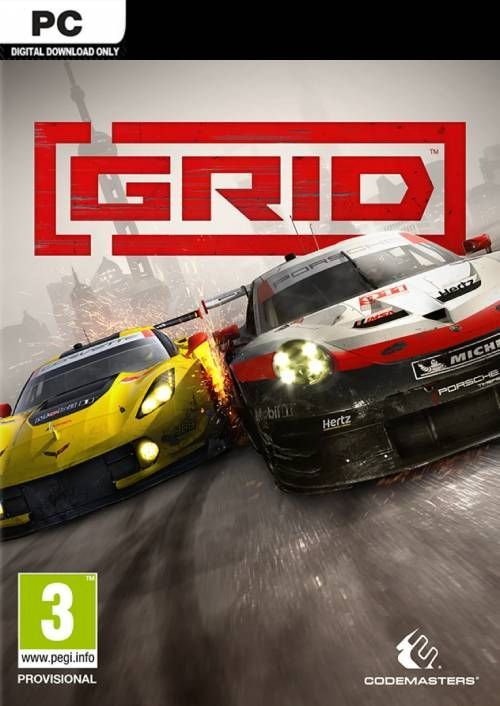 GRID base game for PC.

The game is said to fall somewhere between an arcade-style racing game and a hyper-realistic simulation game, and none other than Formula One legend Fernando Alonso has been brought along to weigh in with his opposition and enthusiasm for the sport in all its various forms and classes.

The game finds the sweet spot where it appeals to both casual players looking for a relatively easy to master challenge and serious sim drivers who want a realistic and fully immersive experience. It is not designed to fill either of these two markets, instead being aimed quite precisely between them.

Much of the game’s design and graphics has been based on, along with Alonso’s expert advice and preferences, feedback from players over the years since the very first game in the series came out. This game was actually called Racing Driver: Grid, so the reboot is actually the first with the name in its current, capitalised form.

Unlike other racing simulation games, you can incite road rage in AI vehicles who do not take kindly to having you bump into them: should you do it on purpose and more than once, they will react aggressively, braking in front of you, pushing you to the side of the road and generally making your life difficult. There are over four hundred AI drivers, so you have a lot of drivers to harass!

Should you successfully irritate an AI competitor you may – fairly soon – come to regret it! The AI is programmed to forget about the race, once targeted by a driver, and will then proceed to do everything in its power to revenge themselves upon you, from cutting you off, slowing you down, even shunting you off the road. Unless you feel like living dangerously, try not to annoy these drivers: they’re not the sort to laugh it off!

Classes of Race to Try
There are various types of racing style to try out, each on varying terrains from ovals and circuits to streets, complete with other road users and obstacles that might surprise you:

GT (Grand Tourer) – these powerful vehicles offer you a comfortable ride while serving up as many horses as you need. Bulky, powerful and fast, this vehicle makes for a exciting if solid ride
Tourer – these jerry-rigged race cars are often based on the family cars that they were originally made from, like teenagers souping up the family Mondeo to go from nought to seventy in a split second
Stock Car – originally the phrase meant any vehicle in its original state, unmodified and raced against other similar cars in that same unmodified state. These days, it refers to any vehicle that is produced with competitive racing in mind
Muscle Car – high performance, rear wheel drive, plenty of snarling horses (you know what I mean!) under the hood, muscle cars are everyone’s driving dream. Drop the transmission and leave burning rubber behind you as you put your dream car through its paces
Super-Mod – super modified cars blast around the tracks, scaring the pants off the oppositions (and probably the drivers too, sometimes!) See what tweaks you can use to rocket your souped-up baby around to the winning post
PostTweetShare Share with WhatsApp Share with Messenger
Community Updates
CDKeys DealsCDKeys voucher codes
If you click through or buy, retailers may pay hotukdeals some money, but this never affects which deals get posted. Find more info in our FAQs and About Us page.
New Comment Subscribe Save for later
Top comments
18th Nov 2019
fiver next week
6 Comments
18th Nov 2019
fiver next week
18th Nov 2019
My heart bleeding as I was hoping first GRID quality but from people that played it I hear it's somewhere between 2 and Autosport which is BAD
18th Nov 2019

2 and autosport are good, grid 2019 feels like grid but with a sort of more realistic more challenging handling
19th Nov 2019
LOL at falling between arcade and 'hyper-realistic simulator'. It falls nowhere near Rfactor 2 that's for sure. Or even Project Cars.
19th Nov 2019
Tumble tumble tumble
Glad I didn’t buy this, might bite for under £10 though