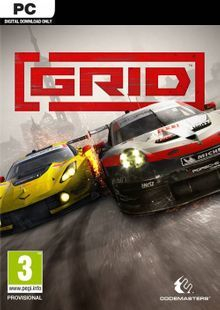 GRID is a vehicle racing game, the fourth in the series, but a reboot rather than a follow-on. The game aims to harness everything popular and good about the first three games and present them in a new, slicker format using modern graphics and physics engines for even more realistic driving play.

The game is said to fall somewhere between an arcade-style racing game and a hyper-realistic simulation game, and none other than Formula One legend Fernando Alonso has been brought along to weigh in with his opposition and enthusiasm for the sport in all its various forms and classes.

The game finds the sweet spot where it appeals to both casual players looking for a relatively easy to master challenge and serious sim drivers who want a realistic and fully immersive experience. It is not designed to fill either of these two markets, instead being aimed quite precisely between them.

Much of the game’s design and graphics has been based on, along with Alonso’s expert advice and preferences, feedback from players over the years since the very first game in the series came out. This game was actually called Racing Driver: Grid, so the reboot is actually the first with the name in its current, capitalised form.

Unlike other racing simulation games, you can incite road rage in AI vehicles who do not take kindly to having you bump into them: should you do it on purpose and more than once, they will react aggressively, braking in front of you, pushing you to the side of the road and generally making your life difficult. There are over four hundred AI drivers, so you have a lot of drivers to harass!

Should you successfully irritate an AI competitor you may – fairly soon – come to regret it! The AI is programmed to forget about the race, once targeted by a driver, and will then proceed to do everything in its power to revenge themselves upon you, from cutting you off, slowing you down, even shunting you off the road. Unless you feel like living dangerously, try not to annoy these drivers: they’re not the sort to laugh it off!

Classes of Race to Try
There are various types of racing style to try out, each on varying terrains from ovals and circuits to streets, complete with other road users and obstacles that might surprise you:


PostTweetShare Share with WhatsApp Share with Messenger
Community Updates
Instant Gaming Deals
New Comment Subscribe Save for later
11 Comments
13th Feb
Grid is an epic game. Not sure it's worth £10 though for such an old game
13th Feb

Grid is an epic game. Not sure it's worth £10 though for such an old game

Yes, it's a remake where most of the content is DLC. Sigh.
13th Feb

Yes, it's a remake where most of the content is DLC. Sigh.

I've just been reading reviews - they stripped the customisation garage?!
13th Feb
158 peak players
14th Feb
I've got this. It's a lot of fun and looks amazing. I certainly wouldn't describe it as being anywhere near a hyper-realistic simulation game though. It's an arcade racer.
14th Feb

Grid is an epic game. Not sure it's worth £10 though for such an old game

haha you're mistake it with the old version
14th Feb
This is a remake and is basically a cash grab. None of my friends that still play Grid every night on the 360 play it (even though they bought it) and it's so bad that Codemasters are looking for new game designers and PR managers.