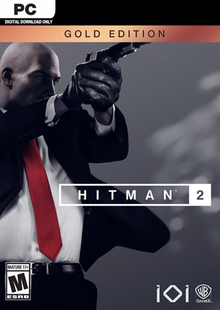 Travel the globe and track your targets across exotic sandbox locations in HITMAN 2. From sun-drenched streets to dark and dangerous rainforests, nowhere is safe from the world's most creative assassin, Agent 47.

Prepare to experience the ultimate spy thriller story; your mission is to eliminate the elusive Shadow Client and unravel his militia, but when 47 learns his target's true identity and the truth about his past, it changes everything.

HITMAN 2 introduces new ways to play, new game modes and new features, including the new Sniper Assassin mode with franchise first co-op.
PostTweetShare Share with WhatsApp Share with Messenger
Community Updates
Indiegala Deals
If you click through or buy, retailers may pay hotukdeals some money, but this never affects which deals get posted. Find more info in our FAQs and About Us page.
New Comment Subscribe Save for later
3 Comments
24th Nov 2019
£7.49 and I'll buy it
24th Nov 2019

Doubt gold will go that cheap this is full game + 2 expansion passes. Even the first game has only noww gone to that price 3 yrs later & that was without the expansion pass since there was none
Edited by: "marc1982" 24th Nov 2019
24th Nov 2019

On the games 1st Anniversary IO shared these fun facts about the game, including what stuff gold edition contains in one handy image.