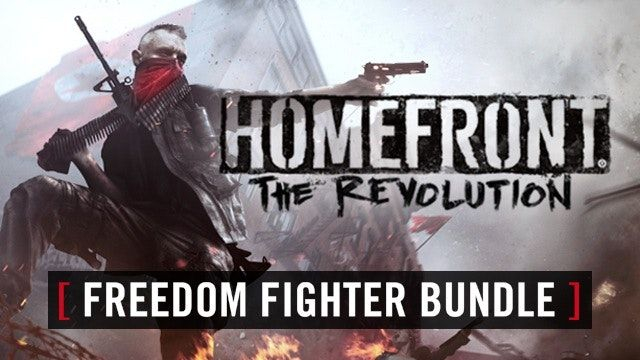 With this bundle, you'll get the action-packed base game and Expansion Pass DLC, with access to all three single-player expansions and exclusive bonuses for the online co-op experience.

THE REVOLUTION HAS BEGUN!
Homefront: The Revolution is an open-world first-person shooter where you must lead the Resistance movement in guerrilla warfare against a superior military force.

A living, breathing, open world responds to your actions - you and your Resistance Cell can inspire a rebellion on the streets and turn Occupation into Revolution, as oppressed civilians take up the fight.

But your enemy has the advantage - superior technology, firepower, heavy armor and air support. You must learn the art of guerrilla warfare – ambush, sabotage, infiltration, deception – and fight a running battle through the war-ravaged suburbs of Philadelphia.

And the single-player campaign is just the start – in Co-Op you and your friends can form your own Resistance Cell and become renowned as Heroes of the Revolution.


PostTweetShare Share with WhatsApp Share with Messenger
Community Updates
Fanatical DealsFanatical Discount Codes
New Comment SubscribeSave for later
7 Comments
5th Mar
A mediocre FPS not worth 99p
5th Mar
Just as a counter to the first post, I absolutely loved this game. Was very disappointed in the original Homefront but there was something about this game that I really liked.

I was never enthused enough to wan't to play it, but i know its been patched up a lot, and has a lot of loyal players definately worth £4.49, hell, its a masterpiece compared with the likes of ''HL/Anthem/Andromeda or Fallout76''.
6th Mar

I really enjoyed it too. Some games get a bad reputation from people who have never even played them, they are just parroting other peoples opinions.
6th Mar
I would echo the positive comments. I think the patches have massively improved the game.
11th Mar

Does this version include all dlc? It's not on sale anymore but so I can add it to my wishlist on fanatical.
17th Mar
I thought it was pretty decent