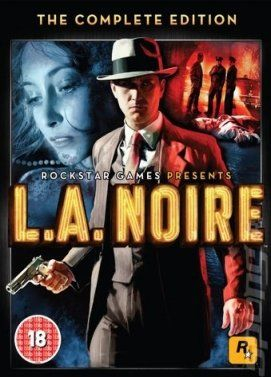 Amid the post-war boom of Hollywood's Golden Age, Cole Phelps is an LAPD detective thrown headfirst into a city drowning in its own success. Corruption is rampant, the drug trade is exploding, and murder rates are at an all-time high. In his fight to climb the ranks and do what's right, Phelps must unravel the truth behind a string of arson attacks, racketeering conspiracies and brutal murders, battling the L.A. underworld and even members of his own department to uncover a secret that could shake the city to its rotten core.

Using groundbreaking new animation technology that captures every nuance of an actor's facial performance in astonishing detail, L.A. Noire is a violent crime thriller that blends breathtaking action with true detective work to deliver an unprecedented interactive experience. Search for clues, chase down suspects and interrogate witnesses as you struggle to find the truth in a city where everyone has something to hide.
PostTweetShare Share with WhatsApp Share with Messenger
Community Updates
Instant Gaming Deals
If you click through or buy, retailers may pay hotukdeals some money, but this never affects which deals get posted. Find more info in our FAQs and About Us page.
New Comment Subscribe Save for later
15 Comments
26th Dec 2019
Any idea if this includes the VR version?
Heat either way.
26th Dec 2019

Any idea if this includes the VR version? Heat either way.

No chance
26th Dec 2019
Excellent game, paid more for this a little while back - sadly, didn’t realise it wouldn’t work on my Nvidia Shield.
26th Dec 2019
Tried to get the ps4 platinum on this..pain in the ass lol!
26th Dec 2019
Sooooooooooo, underrated. Loved it!

Good game, don't buy on PC though the port is trash.

Well that’s why it’s £3.49 and not more expensive. Pretty simple.
27th Dec 2019
I played LA Noire on the PS3 years ago and thought it was incredible at the time. I'm going to rebuy and replay the game on the PC at this price. Just a few questions to the PC users can you enable 4K and 60fps or unlimited framerates in the game menu or do you need to use ini tweaks, download modded patches etc and do they still work?
27th Dec 2019

Tried to get the ps4 platinum on this..pain in the ass lol!

Last trophy to drive all cars was a bitch, spent most of one day ticking off cars I’d driven and using a guide to find rare ones. Finally got it and it felt goooooood.
27th Dec 2019
Clicking through to purchase and there's a warning that says this game isn't compatible with Windows 10? Is this really the case?
27th Dec 2019
Bought but wish I'd spotted the Windows 10 incompatibility message first!
27th Dec 2019
Ah... looks like there's an easy fix!

It's listed as one of the supported games, so I'm guessing that the list hasn't been updated for this game then?
27th Dec 2019

No idea - I bought it from a site and it shows in Steam but won’t install - asked in a Shield group and was told it’s because it’s a Rockstar game and I need Rockstar Social club? I only have a Shield (no PC) if that makes any difference. Mafia 2 and Dead Rising purchased at the same time worked fine
27th Dec 2019

Well that’s why it’s £3.49 and not more expensive. Pretty simple.

It’s £3.49 due to its age. But it doesn’t run well on modern PC’s and needs an update, which there’s not much chance of it getting. If possible I’d play it on the Xbox one or PS4 instead, that release is much better