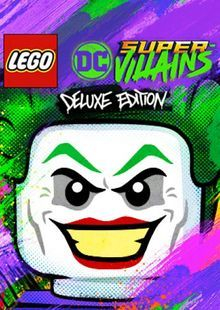 £6.99CDKeys Deals
Expert (Beta)1
Get deal*Get deal*
Expert (Beta)
1Get deal*Get deal*
Posted 10th May
It's good to be bad… Get the Deluxe Edition now and gain access to the main game and season pass content. Embark on an all-new DC/LEGO adventure by becoming the best villain the universe has seen in LEGO® DC Super-Villains.

LEGO DC SUPER-VILLAINS is an upcoming Lego action-adventure video game. It is the first in the Lego game that focuses entirely on the villains of the DC Universe. It is being developed by Traveller's Tales and it is being published by Warner Bors. Interactive Entertainment in October 2018. The game is a spin-off of the Lego Batman trilogy, and it is the fourth installment in the popular Lego DC franchise.

For the first time in the Lego DC franchise, players will be able to create their very own custom characters that will then get integrated into the game's story. New customization options and abilities will be unlocked as you progress through the game, which also features a two-player cooperative multiplayer mode.

The story of LEGO DC SUPER-VILLAINS focuses on Earth after the Justice League goes missing. But, a new superhero team from a parallel universe will watch over the planet, and they are called the Justice Syndicate. The Joker, together with a criminal that possesses various powers, decides that the Injustice League needs to step up their game against this new team of superheroes. Strangely enough, when they discover that this Justice Syndicate isn't what they expected it to be, it will be up to the villains to put a wrench in their plans and save the Earth.
PostTweetShare Share with WhatsApp Share with Messenger
Community Updates
CDKeys DealsCDKeys voucher codes
New Comment SubscribeSave for later
1 Comment
10th May
Standard version is 4.29 too