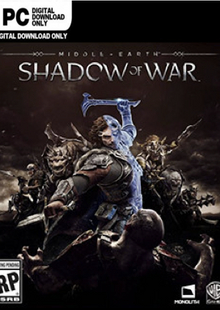 The sequel to the critically-acclaimed Middle-earth: Shadow of Mordor – winner of more than 50 industry awards – features an original story with the return of Talion and Celebrimbor, who must go behind enemy lines to forge an army and turn all of Mordor against the Dark Lord, Sauron.

Set between the events of J.R.R. Tolkien’s The Hobbit and The Lord of the Rings, experience an epic open world brought to life by the award-winning Nemesis System. Players have the opportunity to wield a new Ring of Power and confront the deadliest of enemies, including Sauron and his Nazgul, in a monumental battle for Middle-earth.

This time is isolation should be about spending time with the kids and...no wait, I think I'd prefer fighting with Sauron!
4th Apr
At least you aren't calling your kids goblins! Buy a football for the kids and tell them come back in a few hours!
5th Apr
Perfect timing, I just finished Shadow of Mordor a couple of days ago and loved it (on Steam). I was gonna play it on Xbox with gampass but for £2.99 it's a no brainer.
5th Apr

Need a deal on a 2GB ssd now

Don't buy the new COD, had to download 171 GB the other night and the game was already installed. God know what they're putting on my PC!! Presumably skynet
5th Apr

Jesus! I use my console for cod etc... I tend to just play strategy games on my pc, I bought division 2 because it was on offer for like £2 a few weeks ago lol
5th Apr

That reminds me, continue downloading the division 2. Hopefully done by tomorrow. Also hopefully I enjoy it for at least the amount of time it took to download...
6th Apr

To be honest I played it for an hour and didn’t really enjoy it, perhaps should of stuck with it longer but can re download it at any time.. games are just too big of a download now.. ridiculous really, then you’ll get a 60 gig update lol