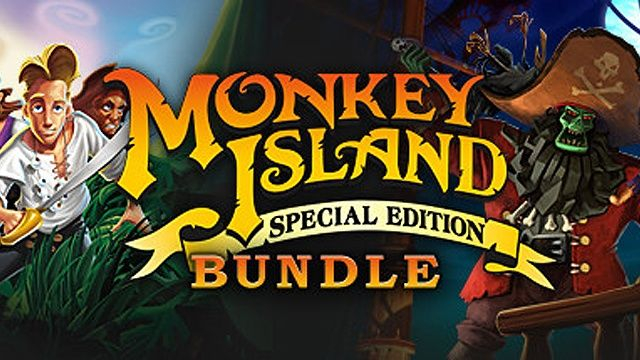 Back by popular demand, The Secret of Monkey Island™: Special Edition faithfully re-imagines the internationally-acclaimed classic game (originally released in 1990) for original and new audiences alike. The development team at LucasArts is bringing the game into the modern era with an all new re-imagined contemporary art style, a re-mastered musical score, full voiceover, and an in-depth hint system to help players through the game’s side-splitting puzzles. Purists will also delight in the ability to seamlessly switch between the updated hand-drawn re-imagining and the original classic version.
The game's twisty plot leads our naive hero on a hilarious, swash-buckling search for the fabled secret of Monkey Island. Tales of pirate wealth lure him to the port of Mêlée with high hopes, no money, and insatiable curiosity. If clever enough, he will win the confidence of Mêlée's pirates and find himself blown by the winds of fate toward the terrifying and legendary Monkey Island -- an adventure that would chill the bones of even the most bloodthirsty buccaneer.

Relive the swashbuckling humorous misadventures of the wannabe pirate Guybrush Threepwood
Go on a daring adventure in your attempt to become the most infamous pirate in the Caribbean
Win the heart of the beautiful governor, Elaine Marley
Along the way, confront the evil ghost pirate, LeChuck
Play it again for the first time
All new re-imagined contemporary art style, hand-drawn to feature animation quality
Re-mastered music score presented in full orchestrated detail
Complete voice over using the original Monkey Island™ franchise cast brings the story and characters of the original adventures to life like never before
Scene-for-scene hot swap allows for seamless transition between special edition and classic modes anywhere and at any time
Includes all new features
All new intuitive game interface and controls provide a more interactive gameplay experience
In-game puzzle hint system keeps the puzzles fresh and fun

Wannabe pirate Guybrush Threepwood, and the now zombie pirate LeChuck, return in what has long been considered one of the greatest LucasArts adventure games of all time. Monkey Island™ 2 Special Edition: LeChuck’s Revenge™ faithfully re-imagines the classic Monkey Island™ sequel in signature special edition detail. Expanding on the highly successful The Secret of Monkey Island™: Special Edition in just about every way, fans will now experience new unique special edition features and interact with the world of Monkey Island like never before.
Having seemingly defeated the evil ghost pirate LeChuck in his first adventure, Guybrush Threepwood sets his sights on the legendary treasure of Big Whoop. But wait, LeChuck is now back in zombie form and he's out for revenge. Guybrush will have to use his wits, his humor and his insatiable desire for adventure to defeat his nemesis once and for all and truly prove himself the greatest pirate in the Caribbean. Voodoo dolls, spitting contests and amusement parks are just some of the challenges Guybrush must overcome as he meets old friends, fights new enemies and uses every ounce of his mojo to overcome the wrath of LeChuck’s revenge.
Play it again for the first time with signature Special Edition features:
High-definition graphics: All new re-imagined contemporary art style, hand-drawn and presented in high definition.
Voice over: Complete voice over using original Monkey Island franchise cast members brings the story and characters to life like never before, now available for both the Special Edition and Classic modes.
Renewed music score: Re-mastered and re-recorded musical score using live instruments.
Special Edition and Classic modes: Scene-for-scene hot swap lets you seamlessly transition between Special Edition and Classic modes at anytime during gameplay.
Enhanced gameplay: All new intuitive game interface and controls provide a more interactive gameplay experience.
Hint system: In-game puzzle hint system keeps the puzzles fresh and fun.
Includes all new features:
Direct control: Choose how you play -- use the classic point-and-click interface or the all new intuitive direct character control for a more interactive gameplay experience.
Object highlighting: Interactive object highlighting provides quicker clues to finding hidden objects.
Behind the scenes art: An in-game art viewer lets players view fantastic never-before-seen artwork from both the Classic and Special Edition versions of the game.
Original developer commentary: Listen to select scene commentary from Ron Gilbert, Tim Schafer and Dave Grossman as they share funny stories and chronicle the development of the original Monkey Island™ 2: LeChuck's Revenge™.
SteamWorks Achievements: Only the mightiest of pirates can collect all three. We kid, there’s a lot more, but you will need to be mighty to get them.
PostTweetShare Share with WhatsApp Share with Messenger
Community Updates
Fanatical DealsFanatical Discount Codes
New Comment Subscribe Save for later
Top comments
25th Jan

Have to disagree. The game still holds up really well today and the remakes are very well done.
25th Jan

I strongly disagree, these games are every bit as good as they were. You can turn off the new graphics if you want to.
26th Jan

I am rubber, you are glue
32 Comments
25th Jan
Heat for the price, but if you played it back in the day, don't do it. You'll ruin the memories of it.
25th Jan

Have to disagree. The game still holds up really well today and the remakes are very well done.
25th Jan

I strongly disagree, these games are every bit as good as they were. You can turn off the new graphics if you want to.
25th Jan

Also disagree. Stll good now. Are the tales of MI available anywhere anyne know? I saw them on psn buy no purchase option...?!
25th Jan
I wish they would make a new one. Nostalge playing all of these
26th Jan
Loved the music
26th Jan
Monkey Island will always get an upvote from me! Arrrr
26th Jan
Wish they made the iPhone app compatible again. No idea why they released special edition on App Store and then stopped support for it

Great games. I love that you can switch between original and remastered whilst playing.
26th Jan
Is this the entire collection or are there more?
26th Jan

Is this the entire collection or are there more?

There were 7 made, this only includes

I am rubber, you are glue
26th Jan

To be honest, it's probably more down to my play style. Even with the new stuff. I never really play a game twice, nor go mental on the completionist stuff once I've finished a game. I usually play it until the end, sell it, move on to the next game.

This was one that I've played twice, once back in the day and second about a year ago. The second time, was so less enjoyable as when I first played it, but as I've said, that's probably more to do with me, than the game.
26th Jan
Used to love this game growing up! Upvoted
26th Jan
Look behind you! A three headed monkey!

You can turn off the new graphics if you want to.

Can you turn the narration off? I haven't played it in ages but remember finding it off putting (got them with GwG).
26th Jan
The third one was the best. And it’s aged really well graphically. Check it out people although I’m not sure if it’s on steam or anything
26th Jan

This is what I was asking...if any of the others were available anywhere? Thanks if anyone a help
26th Jan

The Tales games were delisted from all digital platforms in 2018/2019. You can still find PC physical versions from a few places, though.

I'm not sure where you're getting seven from. There are four core games in the series - these two, Curse and Escape. Separately, there's then Telltale Games' Tales of Monkey Island, which was released episodically in five parts.

Curse and Escape are also available on both Steam and GOG.

I think if you use the old graphics mode it also turns off the narration.
27th Jan

Look behind you, a Three-Headed Monkey!
27th Jan

Your other option is to find a disc copy on eBay and then run it through ScummVM? There are guides online and it does work. I use it- all legit.

I think if you use the old graphics mode it also turns off the narration.

By "narration", do you mean the spoken character voices, given that there isn't a narrator as such? Just turn the voice volume down to zero.
Edited by: "Illusionary" 27th Jan

you can order both separately from GAMIVO for £1.96

Thanks fella !!
13th Feb
Back down in price