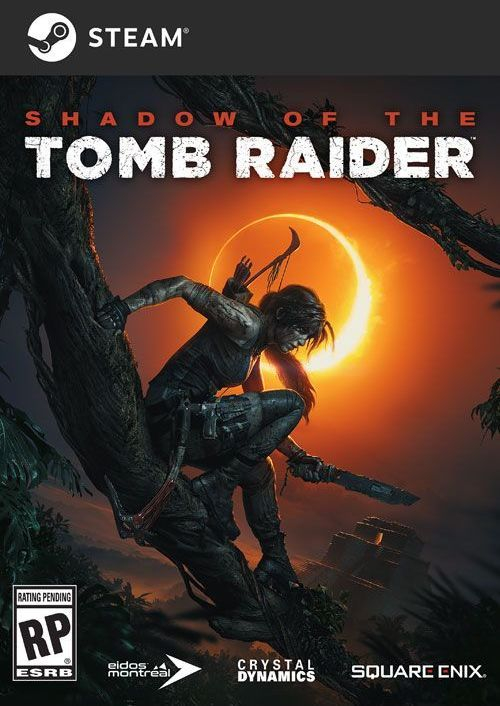 Shadow of the Tomb Raider for is the follow-on game to Rise of the Tomb Raider, once again featuring the aristocratic British orphan who has made it her life’s mission to follow in her father’s footsteps in order to learn more about him.

Lara Croft has accidentally triggered an apocalyptic event by raiding a Mayan tomb. Now she must find the legendary city of Patiti in order to set things to rights. Her job is made harder by the paramilitary organisation, Trinity, who seem to have their own reasons for wanting to let events play out.

Along the way, Lara Croft explores the depths of wild South American forests and mountains, hunting beasts, finding hidden tombs, solving puzzles, and trading with and aiding villagers along the way.

She must also battle Trinity’s soldiers as she strives to reach Patiti before them, needing to work out how to stop the apocalypse that she has accidentally triggered.

The map of this game is immense, and the city of Patiti is a particular delight, being the largest hub in the game franchise so far. This gives players plenty to be getting on with, even as they work to fulfil the terms of the game’s overall story arc.

This version of the game, more than the older editions, place an enormous emphasis on puzzles and hidden tombs. These mini games and side quests are beautifully tailored to be interesting, challenging and – once solved – ultimately satisfying.

Another new addition to this iteration of Lara Croft’s world is a barter system in which items needed for crafting and upgrading supplies can be swapped for items which Lara has in excess.

Lara’s swimming ability has also been vastly improved – she can use air pockets when swimming under water to keep going for longer, and the 360° underwater world becomes a delight when you can explore a little while you dive.

And exploring is something that you want to do: the scenery is beautifully depicted and the game allows you the time to appreciate your surroundings every now and then. The glorious sunsets, breath-taking views, and spectral tombs are all well worth taking a moment to enjoy, before getting back into the game.

The newly incorporated stealth mode offers features that allow you to pick off enemy guards one by one, using a poisoned arrow rather than having a noisy gun battle – although you can still do that if you want to!

There is a playable flashback sequence, showing us what young Lara’s home life was like, before everything went wrong.

Lara Croft is a loner at heart, and throughout much of the game she is solo, battling the elements, the environment and enemies by herself, using her weapons and ingenuity to get by. However, there are three styles of gameplay for you to choose between:


This is self-explanatory, but it bears repeating that the puzzles and hidden tombs are beautifully designed: challenging enough to keep you interested, but not so hard that you become disheartened and stop playing.


Explore the open map ranging as reveal a bigger area than any of the other games in the franchise, with animals to hunt, enemies to sneak up on and beautiful scenery to admire.


Vent some stress by taking out as many Trinity henchmen as you can in as short a time as possible!
If at any point in the game you feel that you want a bit more excitement in your life, you can up the difficulty so that you have more difficult missions, trickier opponents and more challenging beasts to hunt.
PostTweetShare Share with WhatsApp Share with Messenger
Community Updates
CDKeys DealsCDKeys voucher codes
New Comment Subscribe Save for later
12 Comments
11th Feb
Faster then bolt
Edited by: "matwalaboy" 11th Feb
11th Feb
Playing through this at the mo, having finished Rise of the Tomb Raider a few weeks back, and I have to admit it's not as good as it's predecessor. They've tweaked a lot of features, but they just don't feel as cohesive as the previous game eg Challenges have to be discovered now, meaning if you want to be sure you've found them all you have to look them up online.

There's lots of little things that bug me too.. eg entering a native village in the Peruvian jungle where everyone is dressed in authentic garb (so many buttcheeks..), but then the first merchant you come across offers to sell you guns.. pretty incongruous, especially when you later find a document telling you how the natives don't like modern weapons like this. Then there's several glitches where Lara somehow doesn't make a jump that's right in front of her for some reason. The worst was one jump where I had to switch to a gamepad before she'd make it. I'd tried at least ten times with keyboard, but as soon as I tried a gamepad it was instant. If I didn't own one I'd have had to give up on the game by now.

For the deal, price is good but this won't have DLC - the Definitive Edition upgrade was about £8 after registering the main game on Steam, if you want it.
11th Feb

I'd go along with that. I stuck something like 80+ hours into the first one, a bit less into the second but am struggling to finish this one.
11th Feb
Bargain - I paid nearly 3x that in Steam sale a couple months ago (albeit Definitive edition)
11th Feb
Completed the story mode in this in about 6 hours in total. Terrible game, and that’s coming from someone who has played and competed ALL of the TR games.
11th Feb
Much better than rise for me rise was such a boring environment
11th Feb
Nothing tops The Last Revelation. I wish they would remake that bad boy.
11th Feb

I preferred this to Rise as well, but still thought the first of the modern trilogy was the best, that island setting was superb.
12th Feb

Nothing tops The Last Revelation. I wish they would remake that bad boy.

What??? Worst tomb raider of the entire franchise for me that one. Tr2 will always be my favourite
12th Feb
Brilliant game. Id go as far as saying better than uncharted 4
12th Feb
Find these really generic. What I find funny is she's meant to be a scared girl and then murders 100s of people, same as uncharted in that regard
12th Feb