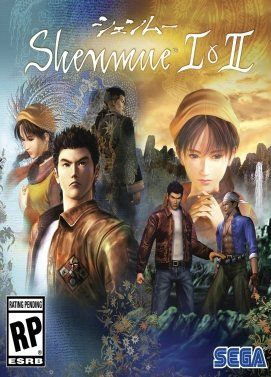 Price is with paying via PayPal

Originally released for the Dreamcast in 2000 and 2001, Shenmue I & II is an open world action adventure combining jujitsu combat, investigative sleuthing, RPG elements, and memorable mini-games. It pioneered many aspects of modern gaming, including open world city exploration, and was the game that coined the Quick Time Event (QTE). It was one of the first games with a persistent open world, where day cycles to night, weather changes, shops open and close and NPCs go about their business all on their own schedules. Its engrossing epic story and living world created a generation of passionate fans, and the game consistently makes the list of “greatest games of all time”.

A tale of revenge.

In 1986, teenage jujitsu artist Ryo Hazuki returns to the dojo of his father, Iwao Hazuki, only to witness his murder by a Chinese man, Lan Di. Lan Di steals a mysterious artifact known as the Dragon Mirror. Ryo vows to avenge his father’s death and sets out tracing Lan Di’s path.

The sequel Shenmue II continues Ryo’s quest, this time crossing the sea to Hong Kong, China. Ryo ventures deeper into the criminal underworld, meeting martial arts masters who aid him on his journey and offer insight into his father’s death, and unravels the mysteries of the Dragon Mirror that his father kept hidden.

Take the role of Ryo Hazuki.

Explore a 3D open world searching for clues, examining objects, and talking to NPCs.
Battle enemies and bosses making full use of the moves of Hazuki-style jujitsu.
Beat quick-time events (QTEs) and mini-games.

The world feels alive
Talk to anyone, scour the world for clues
NPCs live independent lives on their own schedule
Faithful recreations of 1980s Japan and Hong Kong, China
Distract yourself with arcade games, collectibles, duck racing, and more
PostTweetShare Share with WhatsApp Share with Messenger
Community Updates
Instant Gaming Deals
If you click through or buy, retailers may pay hotukdeals some money, but this never affects which deals get posted. Find more info in our FAQs and About Us page.
New Comment Subscribe Save for later
12 Comments
22nd Nov 2019
Hazuki sensei!!!
22nd Nov 2019
Great deal. Two very good games for their time. Some gameplay mechanics feel clunky now but still well worth a play! Currently 8 hours into the third, enjoyed playing through 1 & 2 on steam beforehand.
23rd Nov 2019
Mmmm mmmm good
23rd Nov 2019
Maybe I'll buy one... Nah, not today.
23rd Nov 2019
must of stocked up with humble bundlekeys
23rd Nov 2019
I don't want to ruin the nostalgia and memories of this.
23rd Nov 2019

I don't want to ruin the nostalgia and memories of this.

Why would it be ruined? The game was clunky then and still clunky. The dialogue was cheesy then, and still is cheesy. Every other aspect of the game remains the same too: The story, the music, the multiple gameplay elements, all remain excellent.

If you can't handle any of them aspects, then the 'nostalgia' didn't exist in the first place.
Edited by: "samhain81" 23rd Nov 2019
23rd Nov 2019
I was awesome at using the fork truck, turns out the skill didn't transfer to real life unfortunately!
24th Nov 2019
It's surely not a coincidence that Instant Gaming have these supposedly amazing discounts after Humble cranks them out for a monthly, yet they will still grill the occasional customer for a passport. Worthy of a permanent HUKD ban though it's not my decision to make.
25th Nov 2019

What are on about


Guess what, sole old games arent the same as they where then.

Can you rewrite that in human please?

What are on you about


Guess what, some old games arent the same as when you 1st played them. I agree some games are best left in your memories.