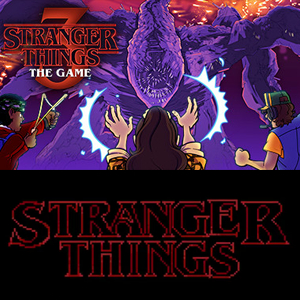 I don't know anything about this game, but it's now cheaper than the last time this was posted (£7.92), so it must be a good deal then...?

Copy/Paste from Steam website:
ABOUT THIS GAMEStranger Things 3: The Game is the official companion game to Season 3 of the hit original series! Play through familiar events from the series while also uncovering never-before-seen quests, character interactions, and secrets! This adventure game blends a distinctively retro art style with modern gameplay mechanics to deliver nostalgic fun with a fresh new twist.

Just like in the show, teamwork is at the heart of Stranger Things 3: The Game. Fans can team up in two player local co-op to explore the world of Hawkins, solve puzzles, and battle the emerging evils of The Upside Down as one of twelve beloved characters from the show.Key Features

Teamwork is the Key—Play through the entire game as two characters (in single player or local co-op). Use your buddy to solve co-op puzzles, take on groups of enemies, and combine your special abilities to pull of powerful combo attacks.

Classic Adventure Gameplay—Delve into dangerous laboratories and hideouts, solve puzzles, search for treasure, and battle evils from the Upside-Down.

Assemble and Level Up Your Party—Unlock a roster of 12 playable characters, each with their own combat style. Use their unique special abilities to taunt, disable, and obliterate your enemies. Craft and equip various trinkets from items discovered throughout Hawkins to power up your team and specialize your favorite characters.
PostTweetShare Share with WhatsApp Share with Messenger
Community Updates
Steam Store DealsSteam Store voucher
If you click through or buy using any of our links, retailers may pay hotukdeals some money, but this never affects which deals get posted. Find more info in our FAQs and About Us page.
New Comment Subscribe Save for later
1 Comment
23rd Dec 2019
This game is fantastic, I've not had as much time on it as I'd like, but it's good fun. Well worth this price