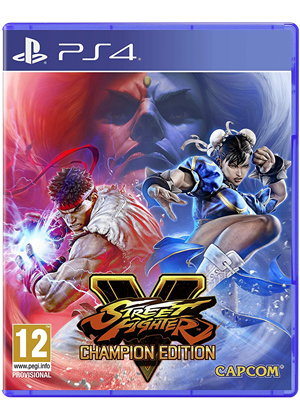 Champion Edition also Heralds the return of gill, the leader of the secret society and the end boss of the street Fighter III series. Gill is a master of both pyrokinesis and cryokinesis, allowing him to control fire and ice with perfect elemental balance (hence his outward appearance). typically plotting behind the scenes, gill is now ready to reveal himself to the world, as he sets out to fulfil the prophecy that the secret society has coveted since ancient times.

fighters can battle their way through a variety of exciting single-player and multi-player modes designed for players of all skill levels, including story mode, Arcade Mode, team battle, ranked match, casual match and more
Release Date: 14 February 2020
Certificate: PEGI 12+ - PEGI Minimum Age 12
PostTweetShare Share with WhatsApp Share with Messenger
Community Updates
Base.com DealsBase.com discount code
New Comment Subscribe Save for later
5 Comments
28th Feb
Can anyone confirm if DLC is on the disc itself or via a download code please?
28th Feb
Base Disc AND DLC.
28th Feb

Download code only. In fact I believe even the disc artwork is the original SFV Ryu picture

It will require a massive download 30gb at least I believe

Can see this being £15 within a few months
28th Feb

They've updated the disc art but the data on the disc is from version 1.0 which makes no sense. It means you'll spend the first hour or so just downloading the large updates to go along with a lengthy install.

And yes, the DLC are codes yet again. Capcom ruined their near flawless record this gen with how they've handled this game. Even last gen all their disc releases of SFIV had the latest DLC and game updates on the disc. I don't know know which morons decided to have it in this poor format for SFV.
Edited by: "SFP_NooDLe" 28th Feb
28th Feb

Ah ok new disc art but a huge download and dlc codes.... I'll probably pick up at £15 since I've only got a few characters