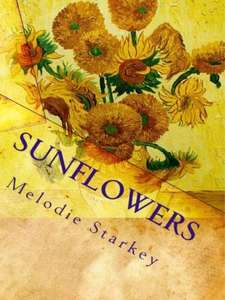 There's nothing like a knock on the door at 3:00 a.m. to change your life forever. Gus Moore discovers how true this is when his ex-girlfriend blows in on an icy January night just long enough to dump "his problem" on the couch. From indolent single slob to competent single parent, Gus's metamorphosis over the next six years is astonishing.
All is going swimmingly for Gus and his son, Sam, until two women complicate their lives: Sarah, with whom Gus has an unsatisfactory friends-with-benefits relationship, and Maureen, his son's bipolar mother, who has decided she wants back into her child's life. Maureen's illness is a subtextual presence that eventually steers the course of the novel.
Sunflowers, which takes its name from the Van Gogh studies of the same, will appeal to a wide spectrum of contemporary fiction readers. Refreshingly, Gus does not have the stereotypical Mr. Mom awkwardness of being a single parent (although he does "outsource the Jesus stuff" to the mother across the street), and there is no predictable "happy couple works it out" ending.

Sunflowers is the author's second book. Her young adult novel, View from the Closet Doorway, won the 2008 SouthWest Writers Conference award in its genre, and she received a grant from the Illinois Arts Council for another novel in progress. Her short story, Stars, won the South Carolina Fiction Writers award and was later included in an anthology of Southern writers. She has also published multiple stories in literary magazines.
PostTweetShare Share with WhatsApp Share with Messenger
Community Updates
Post a comment