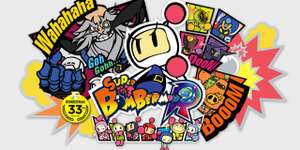 Historical low price here for the game in the sale.

Description
Bomberman is back, and he’s all fired up.

Settle it with pyrotechnics in Super Bomberman R, as the classic series makes its return on Nintendo Switch. While the rules are the same, the style is all-new, with 3D stages, high definition graphics and online multiplayer*.

The party-battle game returns!In Super Bomberman R, move around maze-like grids, placing bombs to vanquish your opponents, all while collecting power-ups to bolster your abilities.

It’s equal parts strategy and destruction, as if you corner a player with one of your bombs, they’re done for! Make sure you’re careful though – just because they’re your bombs, it doesn’t mean they won’t hurt you too.

More friends, more funWith local and online* multiplayer for up to eight players, it’s every bomber for themselves. Get into the action on the big screen in TV mode, link up to eight Nintendo Switch consoles together for multiplayer in handheld mode, or even enjoy local multiplayer on one screen wherever you are using tabletop mode**. Will you keep your cool under pressure, or do you have a short fuse?

Save the galaxy
Bombing solo? No problem! Super Bomberman R also includes a Story Mode, featuring fully voiced cutscenes and over 50 levels. Taking place across a variety of locations, from factories to overgrown temples, you’ll have to use more than fancy pyrotechnics to get the job done. Activate switches, collect keys and take on huge bosses in the Bomberman Rangers’ biggest challenge yet. You can even bring a friend or family member along for the ride for a co-operative bombing experience, just by passing them a Joy-Con.