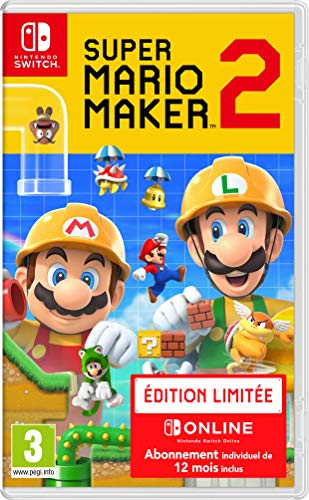 Cheapest price currently in the market as far as I can see, and includes shipping.
Should be cheaper if you have a fee free card and pay in euros (~£38.55), the price on the listing is converted via amazon itself which charges extra.

Do note that it has a French cover, though.

Let your imagination run wild with new tools, course parts, and features as you create the Super Mario courses of your dreams.

Version 2.0.0 available now. Super Mario Maker 2 gets a legendary update. This free update adds Link from the Legend of Zelda™ series as a playable character, new course parts and a new gameplay mode. The new Master Sword item will be available to use exclusively in the 8- bit Super Mario Bros. style. When this new course part is picked up, Mario will transform into Link, equipped with a new set of moves like attacking with a sword, shooting arrows and dropping bombs. In addition to Link, the update also adds more course parts and enemies, as well as a new Ninji Speedruns mode, perfect for players looking for a challenge.
PostTweetShare Share with WhatsApp Share with Messenger
Community Updates
Amazon France DealsAmazon France voucher codes
New Comment Subscribe Save for later
9 Comments
8th Jan
Good price. Heat.
8th Jan
Would you be able to use the nintendo online code for a UK account?
8th Jan
Is it possible to change the language to English on Amazon France and how please someone?
8th Jan

Would you be able to use the nintendo online code for a UK account?

Try translate.google.com and drop the site in there. The buttons won't get translated probably, but put the two sites side to side and you can translate those yourself. The placement is the exact same.
8th Jan
Might be better to get it from Currys on for £36.99 then grab a family slot for £3.50 on the Discussion threads, then you have no hassle if/when it comes to selling French version.
8th Jan