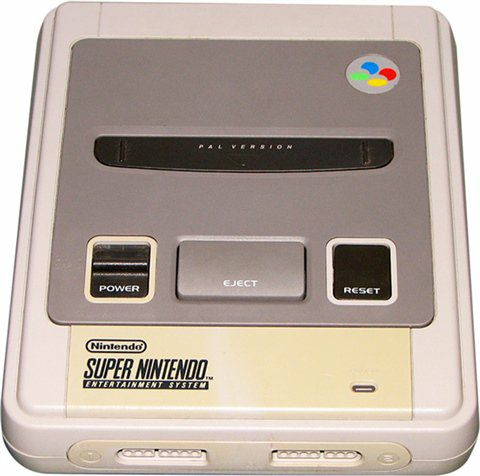 First brought to Europe in 1992, the Super Nintendo Entertainment System blew gamers away with visuals and gameplay that dragged videogames into a spectacular new era. The Super Nintendo features true stereo sound, multiple scrolling backgrounds, and twice the built-in memory of the older NES - and giant-sized Game Paks allow the system to recreate sprawling worlds that take weeks to explore.

The Super Nintendo's built-in DSP (Digital Signal Processor) performs complicated calculations on in-game images in the blink of an eye. This is responsible for 'Mode 7', the ability to take hefty 2D shapes and twist and spin them through three dimensions - allowing games like Super Mario Kart to create pseudo-3D tracks. In the face-flappingly fast F-Zero, this is done at speeds that made even the bravest gamer tremble.

Some of Nintendo's biggest arcade and NES characters return in blistering style on Super Nintendo. Super Mario World; The Legend of Zelda: A Link to the Past; Donkey Kong Country; Super Metroid; Super Mario Kart ... all are regarded as the some of the finest games in their genres to this day. Third parties have helped raise the Super Nintendo's total catalogue of games to over 500.

Building on the seminal design of the NES controller, Nintendo set the standard for future videogame controllers with the faultless Super Nintendo Controller. The comfortable directional pad returns, but two extra buttons and the appearance of twin shoulder buttons - a videogame first - effectively double the gamer's control.

But I would pass on buying a discounted one from CEX, bet it will look a state.
Spend the extra 30-40 and get a really nice good condition and mostly boxed one from ebay.
21st Aug

That'll live with you until the day you die. You need to find that guy on FB, go to his house and take it back. He's probably playing it as we speak.
21st Aug

My favourite ever games console

But I would pass on buying a discounted one from CEX, bet it will look a state.
Spend the extra 30-40 and get a really nice good condition and mostly boxed one from ebay.
21st Aug
The plastic even looks a bit yellowed in the display picture Though, I know, I know, it's nearly 30 years old (gulp)
21st Aug

Easy fix, plenty videos on YT of people using that peroxide women use on their hair
21st Aug

Didn't know that. Anyone want to do my roots while they're at it? My older consoles are long gone but I still have a Gamecube. Somewhere.
21st Aug
Had the imported Super Famicom about a week after Japan Release date, Final Fight was the only game i had at the time

I seem to recall the pal console was much slower
Edited by: "Jace_Phoenix" 21st Aug
21st Aug
I'd get this if I was speedrunning and needed og hardware.
21st Aug

Yeah JAP ran at 60hz but I beleive the PAL ones were 50hz, so games were slower.
21st Aug
Still got mine, couldn't guarantee it works though (same with the games). Great console though, would rather buy a tested used proper one than one of those mini versions with games installed.
21st Aug
Can anybody help me move house please,? It's a right faff .
21st Aug
This is my favourite console of all time but you can buy the classic with 20 games and HDMI connection for the same price and then emulate.
Edited by: "DigitalKnight" 21st Aug
21st Aug

Can anybody help me move house please,? It's a right faff .

Random!
21st Aug
Can it take HDMI input?
21st Aug
I need the psu for an ensoniq fizmo
21st Aug

Not really dumb as there are HDMI converters available now
21st Aug
What's the best way to emulate these and others on say Nvidia Android TV does anyone know? I dipped my toe into it a couple of years ago but didn't fully get into it. At the time I think it was "Retroarch" and "Retro-X."

Also, anyone know a way to play ancient PC games like "Age of Empires", can you download a VM image witha load of games on, then boot it in VMWare say?
21st Aug
Google it!
21st Aug

Yeah it takes 6, works great at 1080p
21st Aug
Everytime I see this amazing console I get flashbacks of when my brand new super street fighter 2 turbo game was stolen from my school bag while playing basketball and the worst part is I know who stolen it but didn’t approach him that felt like 10 million pounds was stolen back then
Edited by: "BoGoF" 21st Aug
21st Aug

Only downside are the controllers are often worn out. My SNES mini classic controllers feel great.
21st Aug

Weren't PAL consoles also letterboxed i.e. not full screen or am I misremembering? Either way, I'd look to buy an import personally. Or just emulate.
21st Aug
Bit overpriced for just the SNES. Just go to a car boot or even on ebay and you'll get a better deal than CEX. And you'll probably get games with it too!
Edited by: "joshua.bishell" 21st Aug
21st Aug

Ah sheeeet. I understand, I remember borrowing a copy of Mario Bros 2 back in the day and losing it. I still remember the feeling of coming clean to my mum, dad and the lad I borrowed it from. Utter doom. Turns out it must have fallen out my school bag in French as it turned up a couple of weeks later somehow, before my parents had sorted the cash for a replacement. The relief is still one of the best human emotions I've experienced lol.

Did the ratbag ever get any comeuppance?? Have you looked him up online to see if the cycle of crime continued?
21st Aug

That'll live with you until the day you die. You need to find that guy on FB, go to his house and take it back. He's probably playing it as we speak.
21st Aug

Yes Retroarch is still probably the best way.
Takes probably 20 mins to setup with controller / emulators and then just add roms.
YouTube will have easy to follow setup guides for which emulators are best for each console (snes9x is the one I use).
Also search YouTube for front end emulator and see what takes your fancy.
21st Aug

Reminds me of a time years ago when I was college and I just got the dead rising steelbook on the 360 and it was expensive at the time. A backstabbing friend asked if he could borrow it and I stupidly said sure just give me it back when your done with it. Sometime passed I asked him about it and everytime i asked about the game I would get a different excuse. He said he would bring it tomorrow then forget etc.then i bumped into him in town one day and said remember you still got my game. His response, oh that I sold that ages ago. I have never let anybody borrow my games since. Lesson learned
21st Aug

Just get an everdrive or equivalent.
21st Aug
Didn't realise they were worth this much. Might chuck mine on eBay!!
Edited by: "matthew80" 21st Aug
21st Aug

Didn't realise they were worth this much. Might chuck mine on eBay!!

The games are worth a lot more
21st Aug

My favourite ever games console

A time when Nintendo were indeed SUPER.
21st Aug

Actually you can leave it in the sun and it works better. That peroxide stuff does make the console plastics go brittle
21st Aug

Not really dumb as there are HDMI converters available now

Yup. Mine is hooked up to an OSSC (along with my Amiga, Dreamcast, N64 and Wii)
21st Aug

A time when Nintendo were indeed SUPER.

I still have mine, the gun and about 45 games. I have very fond memories of the SNES and it comes to mind when I see the question "best console?"

IMO the reason why the SNES was so good was not down to Nintendo games (although there were some very good ones) but the excellent 3rd party support and games.
21st Aug
Loved playing street fighter at my mates. Best conversion at the time. Much better than my mega drive
21st Aug
I have one of these - Super Wild Card. Handy for 'backing up' your carts. I've updated mine to have a USB reader in rather than the 3.25 floppy. 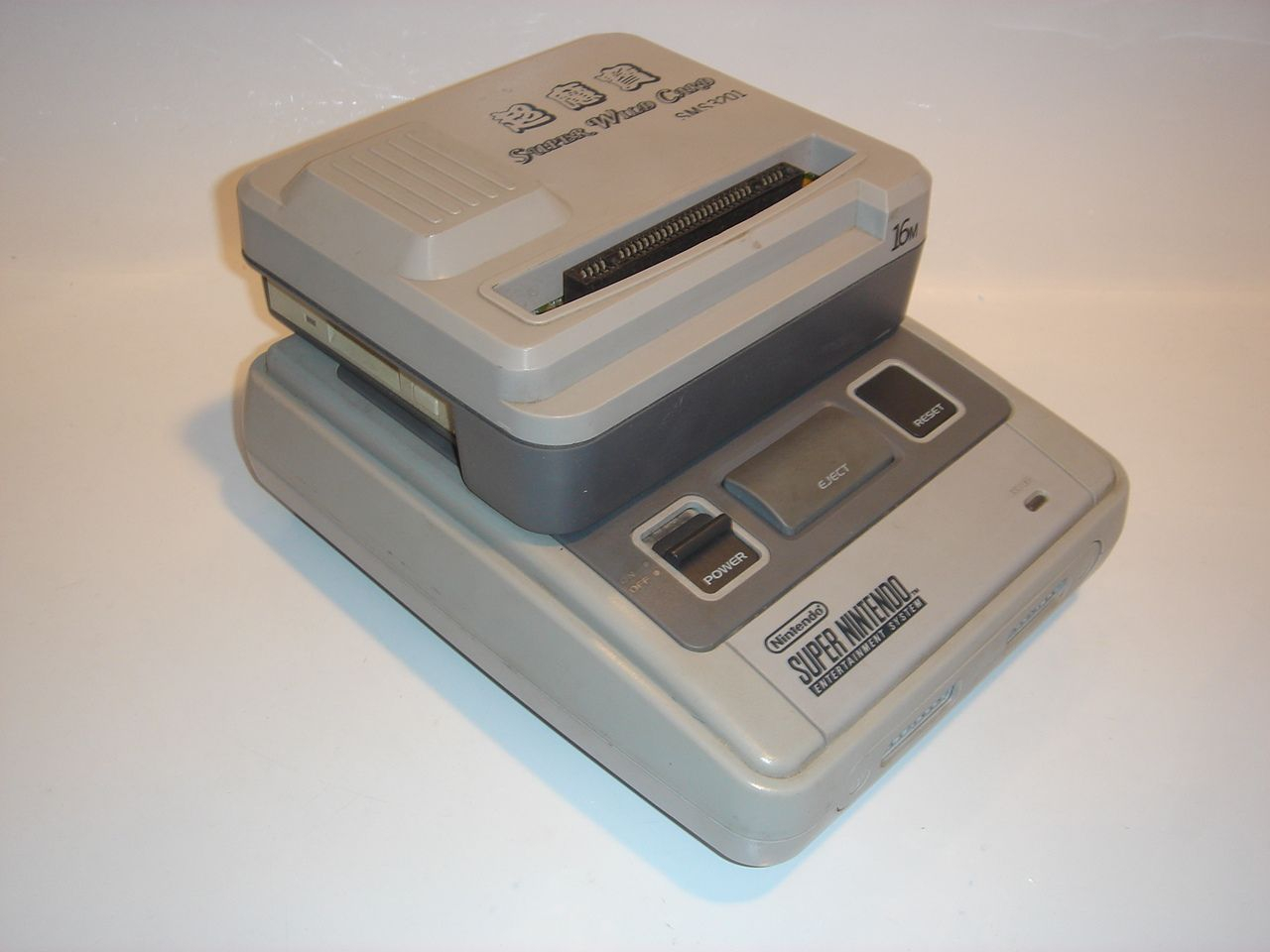 21st Aug
Why didnt i keep mine , traded it in for peanuts