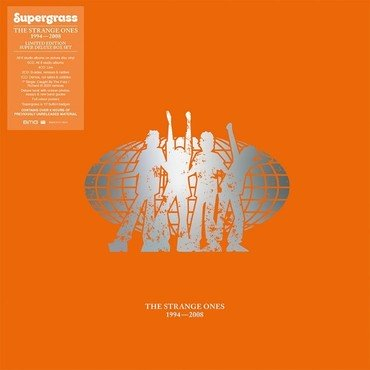 Supergrass – Gaz Coombes, Mick Quinn, Danny Goffey, and Rob Coombes – are one of the most important bands to emerge during the 1990s, with several million record sales, including 6 top 10 albums and 10 top 20 singles. Formed in Oxford UK in 1993, the Brit, Q, NME and Ivor Novello-winning outfit released their Mercury-nominated No.1 debut album I Should Coco in 1995. Fourth single, Alright, was a pop masterpiece and became a massive hit, catapulting the band to global success.


The Strange Ones: 1994-2008 is a comprehensive compilation featuring all of their biggest hits, and a career spanning box set, containing 6 original albums on picture disc LP and CD, bonus CDs of unreleased material, a deluxe book, posters and button badges. The ‘Best Of’ formats feature brand new artwork designed by long-time collaborator of the band, Nick Bax, and art directed by the band themselves.


6LP - All the lps on Picture Disc


Supergrass is 10 - button badges x 8
PostTweetShare Share with WhatsApp Share with Messenger
Community Updates
New Comment SubscribeSave for later
6 Comments
3rd Jun
Its a hell of a lot for the money.. Scrappers will be selling this for twice that this time next year..
3rd Jun
It has been around 126 on Amazon, but they don't have stock at the moment. It is a lot of music for your money, but picture disc is inferior for sound generally.
3rd Jun
is this a wind up?
3rd Jun

is this a wind up?

Are you thinking of a gramophone??
3rd Jun
Great band and collectable box set. Hot
3rd Jun
This is not cheap at all.