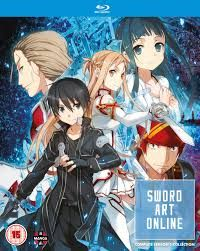 Sword Art Online complete season 1 blu ray.
In the near future, a Virtual Reality Massive Multiplayer Online Role-Playing Game (VRMMORPG) called Sword Art Online has been released where players control their avatars with their bodies using a piece of technology called: Nerve Gear. One day, players discover they cannot log out, as the game creator is holding them captive unless they reach the 100th floor of the game's tower and defeat the final boss. However, if they die in the game, they die in real life. Their struggle for survival starts now..
PostTweetShare Share with WhatsApp Share with Messenger
Community Updates
Base.com DealsBase.com discount code
New Comment Subscribe Save for later
4 Comments
1st Feb
Some other fantastic discounts on other anime also available
1st Feb
Heat for the series and for first post after 10 years of being a member
1st Feb
Better late than never
1st Feb
For those who aren't aware of Sword Art Online

Season 1 - 25 episodes(See this deal)
Season 2 - 24 episodes(Released by Anime Limited in the UK)
Season 3 - 36 episodes so far(Currently airing in Japan and another 12 episodes are due). No one has released Season 3 in English yet.

Put simply this is a fantastic show and there's a lot for you to get into.