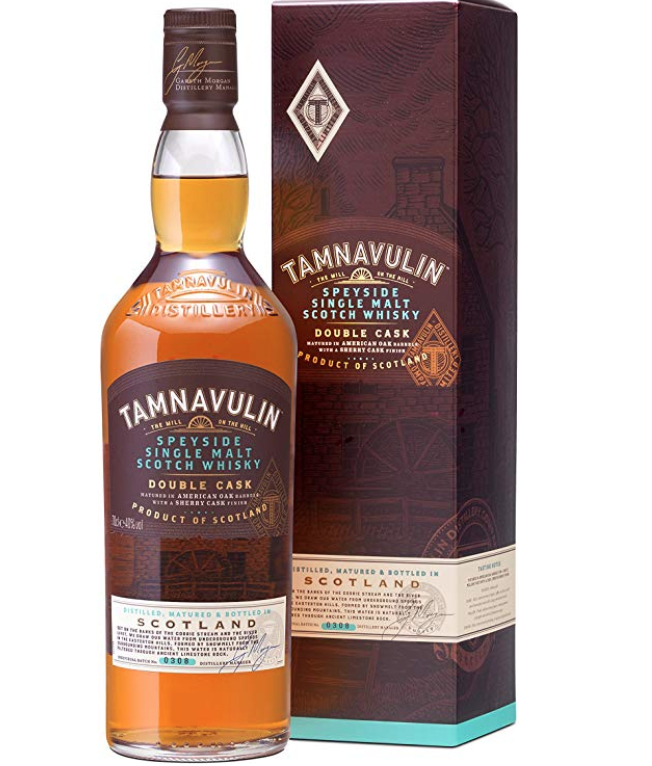 One of my personal favourites.
Hope it helps someone looking forward to stocking this tipple.

Spiel....
From the manufacturer
tamnavulin whisky, whisky, single malt scotch, speyside
tamnavulin, speyside, whisky
The Story
Our story began in 1966 with the opening of the distillery in the rural village of Tomnavoulin, Scotland. Although the doors were closed in 1995, we reopened them in 2007 after a major distillery refurbishment. Since then, we’ve crafted exceptional single malt whisky with a true Speyside character; rich, smooth and mellow.

tamnavulin, distillery
Our distillery
In the foothills of the Cairngorm mountain range is Tomnavoulin, the village home to around 40 residents and Tamnavulin Distillery. The distillery is located deep in the heart of Speyside, the most celebrated whisky-producing region in Scotland. Home to over half of Scotland’s operating malt whisky distilleries, Speyside is the perfect location to produce whisky. The unique microclimate of the region makes it a very temperate area of Scotland. This, combined with the abundance of rich farmland, makes it an ideal place to grow barley and mature whisky

tamnavulin, whisky, speyside
Our mill
The name Tamnavulin is the Gaelic translation of ‘mill on the hill’, named in part after the historic former carding mill which sits on the site of the distillery. Local farmers would bring their sheep fleeces here in the summer months to be made into wool.

tamnavulin, speyside, whisky
Palate
The palate is fresh and mellow with pear, peach and pineapple flavours with a hint of Demerara sugar.

tamnavulin whisky, speyside
Meet the Team
Led by Distillery Manager Gareth Morgan, the 12-strong distillery team are skilled in all areas of whisky making. From milling through to maturation, the time-served craftsmen and women of Tamnavulin Distillery have a passion for whisky and take genuine pride in their skills and the spirits they make.

Description
Product Description
On the Southern edge of Speyside, in the foothills of the cairngorm mountains lies Tamnavulin distillery tucked away on the banks of River Livet and Corrie Stream, they draw water from underground springs in the Easterton hills formed by snowmelt from the surrounding mountains. This water is naturally filtered through ancient limestone rock giving us some of the purest water to be found in Scotland. Double cask matured in American oak barrels for a sweet, mellow taste with a rich, smooth sherry cask finish

Manufacturer Contact Information
Tamnavulin Distillery, Ballindalloch, Banffshire, AB37 9JA, Scotland.
PostTweetShare Share with WhatsApp Share with Messenger
Community Updates
Amazon DealsAmazon discount code
New Comment Subscribe Save for later
9 Comments
9th Feb
Not unusual to be this price, but having to order 2 is a bit naff if you have never tried it and then find you don't like it.

It's from a Whyte & Mackay distillery as well, and Whyte & Mackay are the Bolton Wanderers of Distillery owners right now ( see the dross coming out of Jura as evidence).
Edited by: "The_Bounty_Bear" 9th Feb
9th Feb

True about the newbie 'scotch' aficionado @The_Bounty_Bear , but those who know what it tastes like & are looking forward to stocking....
9th Feb
Jesus wept...this appears on here as much as Cardhu
another crap malt with over inflated RRP to con people into thinking they’re getting a bargain...massive cold for me
9th Feb

Thanks for your opinion @ChrisLawson1967 , but i kinnda like it no issues. Each to their own. Cheers
9th Feb

Definitely, added comfort for Amazon home delivery. Accept that buying 2 is the bit of a bummer but for people who like this dram, it might not be an issue maybe @pault34
9th Feb

‌ . We like what we like.
9th Feb
One of the worst single malts on the market