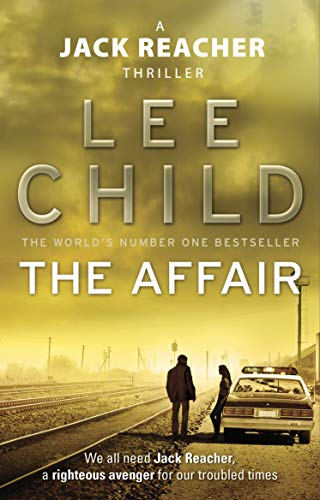 I find the Jack Reacher series a bit hit and miss, but I always keep reading them, and I seem to remember that this one was a pretty good one. The first book (I think) to go back to his army days. Even though this is number 16 in the series, I don't think you need to read them in any order (although some of the later ones do overlap slightly). If you've not read any, then this is as good a place as any to get started with them. The main character is a bit brutal, but very logical. Why Tom Cruise plays him in the films is beyond me. While I was writing this, I searched for info on the films, and found this quote from Lee Child:

"I really enjoyed working with Cruise. He's a really, really nice guy. We had a lot of fun. But ultimately the readers are right. The size of Reacher is really, really important and it's a big component of who he is...So what I've decided to do is – there won't be any more movies with Tom Cruise. Instead we're going to take it to Netflix or something like that. Long-form streaming television, with a completely new actor. We're rebooting and starting over and we're going to try and find the perfect guy."

So that's a relief

Anyway, blurb from the book:

March 1997.‌ A woman has her throat cut behind a bar in Mississippi.

Just down the road is a big army base. Is the murderer a local guy - or is he a soldier?

Jack Reacher, still a major in the military police, is sent in undercover.

The county sheriff is a former U.S. Marine - and a stunningly beautiful woman. Her investigation is going nowhere. Is the Pentagon stonewalling her? Or is she trying not to find the killer?

Set just six months before the opening of Killing Floor, The Affair marks a turning point in Reacher's career.

If he does what the army wants, will he be able to live with himself? And if he doesn't, will the army be able to live with him?
PostTweetShare Share with WhatsApp Share with Messenger
Community Updates
Amazon DealsAmazon discount code
New Comment Subscribe Save for later
8 Comments
19th Feb
Thanks. Never read any of these before so based on your opinion I going to buy this.
19th Feb
It's a good book, with more of a whodunnit theme than most of the Reacher books. As it's a prequel no problem reading it without having read any of the others.
19th Feb
Have read all Reacher books, have most in hardback as I like to read them on the day of release. Last one Blue Moon is much more uncharacteristically violent compared to rest of the books, but as OP stated TV series is coming out and Lee Child's brother is taking over writing from next book, which is out in October. My guess last one is an indication where Jack Reacher is heading. I'm not sure I like it, but time will show if I'm wrong.
20th Feb
Jack Reacher is the man, I would have his babies!!!
4th Mar
I had a Jack Reacher binge late last year, enjoyed all the books. In the same vein, try Vince Flynn's about a CIA assassin Mitch Rapp. Flynn passed away a few years ago but the legacy has ably continued by Kyle Mills.
4th Mar
£5.99
4th Mar
Read this again last week. It's sort of a Jack Teacher origin story! Well worth reading once or more!
4th Mar
expired. £5.99 now