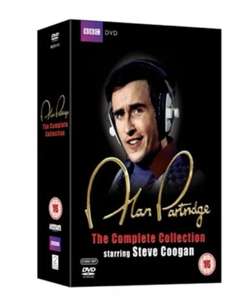 matwalaboy Expert (Beta)25
Posted 13th Oct 2021
Good price for the complete box set - use the code FBOFFER10 to get it for the price mentioned.

'Knowing Me, Knowing You' (1994) sees Alan presenting his own TV series along with the Christmas Special ‘Knowing Me, Knowing Yule’ . The two series of 'I'm Alan Partridge' (1997 and 2003) chronicle Alan's increasingly desperate attempts to rebuild his tattered career after assaulting the BBC's Chief Commissioning Editor with a frozen turkey!

Alan Partridge, the chat show host from hell (or more precisely, Norwich) hit the TV screens with his own series in 1994 – and we still haven’t stopped laughing. Aiming to “quite literally put the chat amongst the pigeons,” Alan took on prime time TV – and lost, badly. As chat show host he is brash, cheesy and uncompromisingly narrow-minded. Faced with crude clown groups, risqué men’s dance troupes and fashion designers, he is obnoxious and downright rude. As only Partridge can, he humiliates, infuriates, assaults and even kills his guests – but always, ends his show like a true professional… “On that bombshell…”

I’m Alan Partridge – Series 1
Since his chat show came to a catastrophic end, Alan Partridge has been rebuilding his career as an early morning DJ on Radio Norwich. With his loyal PA Lynn by his side, Alan prepares for his return to celebrity status.

I’m Alan Partridge – Series 2
After a couple of years of being clinically fed-up, Alan has ‘bounced back’. He’s got the third best slot on Radio Norwich, a military-based quiz on cable TV called Skirmish, a 33 year-old girlfriend called Sonja, an autobiography (Bouncing Back) and is only living in a caravan until his new house is finished.