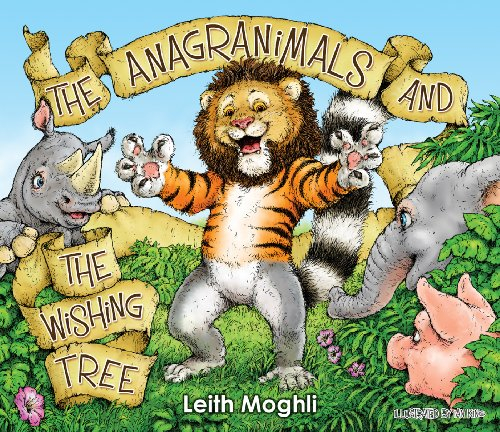 The Anagranimals and the Wishing Tree Kindle Edition FREE at Amazon

The Anagranimals have not always been Anagranimals.
Once upon a time they were ordinary every day animals.
But the animals wanted to be anything but ordinary!!!

They longed to be able to do things that other animals could do!! So, when a magical wishing tree grants them a special wish, they each wish for the best parts of their favourite animals… Life on Pogo Bogo will never be the same again!!!!

The Anaganimals and the Wishing Tree is a charmingly narrated and beautifully illustrated tale that will feed your imagination until it’s fit to burst!!!

About the Author
Leith Moghli was born in Jordan’s capital city, Amman in 1983. He grew up with a huge family. 2 parents, 1 sister, 11 aunties and uncles, 36 cousins and more second cousins than you can count on your hands and feet. The whole family lived in 3 large houses, all on the same street. As you can imagine, life was noisy and seldom boring!!

When Leith grew up, he became a corporate lawyer and now works for an international law firm based in London, England. When Leith isn’t busy drafting long contracts and doing battle with other lawyers, he writes children’s books. He is also the founder and CEO of Anagranimals Ltd, the company behind the Anagranimal books, toys and games.

Leith lives in South East London with wife Heidi, son George, dog Charlie, cat Mickey and horse Sealand. There is also a hedgehog called Nigel that lives at the bottom of Leith’s garden but he’s a little shy and hates it when Leith tells people about him.
PostTweetShare Share with WhatsApp Share with Messenger
Community Updates
Post a comment