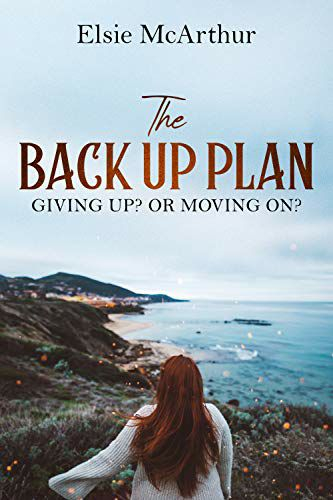 The Back Up Plan: Giving up? Or moving on? By Elsie McArthur on Kindle @ Amazon - 99p

Giving up? Or moving on?

That’s the question for thirty-something Marsaili McKenzie. Ten years after fleeing her tiny coastal village for dreams of fame and fortune in the big city, she finds herself on the brink of an existential crisis. Far from being the star actress she once imagined, she’s still working as a barmaid in a Glasgow theatre while all around her, her friends and family are getting engaged, pregnant or promoted.

It’s all she can do to keep her head above water. But as a new year approaches, she resolves to give her acting dreams one last shot. That is, until a couple of unexpected distractions arrive on the scene.

Will Hunter is undeniably handsome, as well as being aloof, socially awkward, posh and in the middle of a nasty divorce. And to make things even more complicated, he’s also her new boss.

Local boy made good, soap star Euan Campbell, is the epitome of a charismatic leading man. His easy-going charm soon sweeps Marsaili off her feet, but is there more to him than meets the eye?

To top it all off, Marsaili finds herself inexplicably drawn back to the simple, rural life she used to loathe. Can she finally figure out which dreams are worth pursuing, and would it really be so bad to resort to her back up career after all?

Join Marsaili as she navigates the choppy seas of love, family, friendship and self-discovery. This heart-warming novel is full of romance, laughter and more than enough drama to keep you on the edge of your seat!
PostTweetShare Share with WhatsApp Share with Messenger
Community Updates
Amazon DealsAmazon discount code
New Comment SubscribeSave for later
1 Comment
20th Aug
Somewhat disappointed, as i thought that this would help with my IT data backup dilemma, on the Amazon Web Servers.