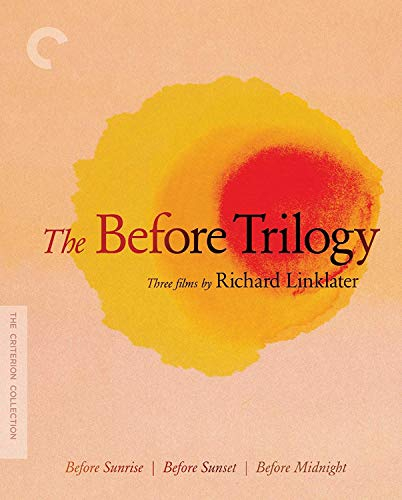 Linklater, this celebrated three-part romance captures a relationship as it begins, begins

again, deepens, strains, and settles over the course of almost two decades. Chronicling the

love of Celine (Julie Delpy) and Jesse (Ethan Hawke), from their first meeting as idealistic twentysomethings to the disillusionment they face together in middle age, The Before Trilogy also serves as a document of a boundary-pushing and extraordinarily intimate collaboration between director and actors, as Delpy and Hawke, who co-wrote two of the films, imbue their characters with a sense of raw, lived-in experience, and as they age on-screen along with them. Attuned to the sweeping grandeur of time’s passage as well as the evanescence of individual moments, the Before films chart the progress of romantic destiny as it navigates the vicissitudes of ordinary life.

An exquisitely understated ode to the thrill of romantic possibility, the inaugural instalment of The Before Trilogy opens with a chance encounter between two solitary young strangers. After they hit it off on a train bound for Vienna, the Paris university student Celine and the scrappy American tourist Jesse impulsively decide to spend a day together before he returns to the U.S. the next morning. As the pair roam the streets of the stately city, Linklater’s tenderly observant gaze captures the uncertainty and intoxication of young love, from the first awkward stirrings of attraction to the hopeful promise that Celine and Jesse make upon their inevitable parting.

In the breathtaking follow-up to Before Sunrise, Celine tracks down Jesse, now a newly minted author, at the tail end of his book tour in Paris, with only a few hours left before his flight back home to the States. Meeting almost a decade after their short-lived romance in Vienna, the pair find their chemistry rekindled by increasingly candid exchanges about professional setbacks, marital disappointments, and the compromises of adulthood. Impelled by an urgent sense of the transience of human connection, Before Sunset remains Linklater’s most seductive experiment with time’s inexorable passage and the way love can seem to stop it in its tracks.

The bittersweet conclusion of The Before Trilogy finds Celine and Jesse several years into a relationship and in the midst of a sun-dappled Greek retreat with their twin daughters and a group of friends. The couple soon find their vacation upended, however, by the aggravations of committed monogamy, which have long since supplanted the initial jolt of their mutual seduction. Marked by the emotional depth, piercing wit, and conversational exuberance that Linklater and his actors had honed over two decades of abiding with these characters, Before Midnight grapples with the complexities of long-term intimacy, and asks what becomes of love when it no longer has recourse to past illusions.