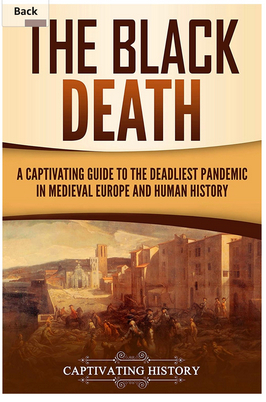 The Black Death: A Guide to the Deadliest Pandemic in Medieval Europe and Human History - Free Kindle Edition @ Amazon

The Black Death was the first recorded pandemic in Europe after the fall of the Roman Empire. All across the continent, people learned just how gruesome and horrific disease could be as the plague crossed the boundaries of countries and the lines established by society, killing everyone equally. It showed that no one—not even archbishops and kings—were immune from its grasp. The ferocity with which the plague swept across the continent, even reaching the shores of England, demonstrated how unprepared they were for something on such a large scale. It was the first time that a major disease would strike the continent after the fall of the Roman Empire, but it would not be the last.

Over the next few centuries, the bubonic plague would return several times. Although it was incredibly deadly, it never again had the same catastrophic effect on the European population. People began to study it from a scientific perspective instead of the same superstitious angle or religious fatalism, making it possible to understand exactly what was causing the deaths. Today, those in the medical profession can easily treat the bubonic plague if they realize what it is early enough. With examples of the illness occurring in many nations during the last decade, including the US, the Black Death is not gone, but it is no longer the death sentence that it once was.

In The Black Death: A Captivating Guide to the Deadliest Pandemic in Medieval Europe and Human History, you will discover topics such as
The First Pandemics
The Black Death
The Unlikely Use of the Black Death
Rumors and Arrival
Perceptions Vs. The Reality
The Ultimate Equalizer
Stealing the Future – Princess Joan
Decline of the Catholic Church and the Rise of Mysticism
Art of the Black Death
The First Quarantine and Successful Containment
Beyond the Human Toll
Lasting Effects on Europe’s Future
And much, much more!
PostTweetShare Share with WhatsApp Share with Messenger
Community Updates
Amazon DealsAmazon discount code
New Comment SubscribeSave for later
4 Comments
6th Jun
Heat
6th Jun
Thank you.
7th Jun
Thanks junior.quadros🐬
7th Jun
Showing as £2.27 now