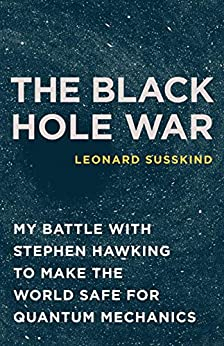 The Black Hole War: My Battle with Stephen Hawking to Make the World Safe for Quantum Mechanics by Leonard Susskind - £0.99 @ Amazon Kindle

What happens when something is sucked into a black hole? Does it disappear? Three decades ago, a young physicist named Stephen Hawking claimed it did, and in doing so put at risk everything we know about physics and the fundamental laws of the universe. Most scientists didn't recognize the import of Hawking's claims, but Leonard Susskind and Gerard t'Hooft realized the threat, and responded with a counterattack that changed the course of physics.

The Black Hole War is the thrilling story of their united effort to reconcile Hawking's revolutionary theories of black holes with their own sense of reality -- effort that would eventually result in Hawking admitting he was wrong, paying up, and Susskind and t'Hooft realizing that our world is a hologram projected from the outer boundaries of space.

A brilliant book about modern physics, quantum mechanics, the fate of stars and the deep mysteries of black holes, Leonard Susskind's account of the Black Hole War is mind-bending and exhilarating reading
PostTweetShare Share with WhatsApp Share with Messenger
Community Updates
Amazon DealsAmazon discount code
New Comment SubscribeSave for later
8 Comments
28th Apr
This sounds incredibly interesting, but I wonder how much background knowledge is needed before reading this?
28th Apr

Thanks. Sounds ideal for me then.
28th Apr
Thanks op I have ordered it
29th Apr
Good spot!
29th Apr
The Butler did it.
29th Apr
I saw documentary about this some time back, excellent stuff.
29th Apr