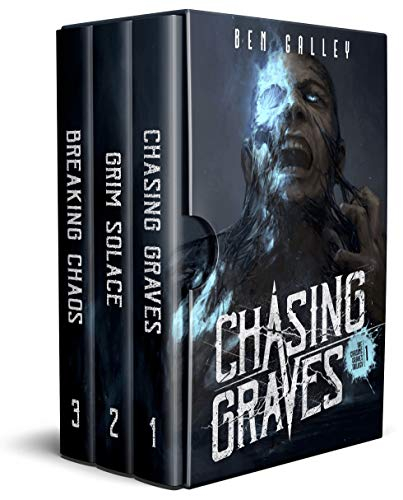 ABOUT THE CHASING GRAVES TRILOGY
From award-winning author Ben Galley comes this fast-paced dark fantasy trilogy set in an immersive and vibrant North African world. Inspired by Egyptian mythology and packed with dark humour, action, and magic, the Chasing Graves Trilogy is perfect for fans of Brandon Sanderson, Scott Lynch, and Joe Abercrombie. Join Caltro Basalt as he fights for his freedom throughout this epic fantasy saga.

Meet Caltro Basalt. He’s a master locksmith, a selfish bastard, and as of his first night in Araxes, stone cold dead.

They call it the City of Countless Souls, the colossal jewel of the Arctian Empire, and all it takes to be its ruler is to own more ghosts than any other. For in Araxes, the dead do not rest in peace in the afterlife, but live on as slaves for the rich.

While Caltro struggles to survive, those around him strive for the emperor’s throne in Araxes’ cutthroat game of power. The dead gods whisper from corpses, a soulstealer seeks to make a name for himself with the help of an ancient cult, a princess plots to purge the emperor from his armoured Sanctuary, and a murderer drags a body across the desert, intent on reaching Araxes no matter the cost.

Only one thing is certain in Araxes: death is just the beginning.
PostTweetShare Share with WhatsApp Share with Messenger
Community Updates
Amazon DealsAmazon discount code
New Comment Subscribe Save for later
3 Comments
17th May
👊
17th May
Heat
17th May
Heat added thanks for sharing