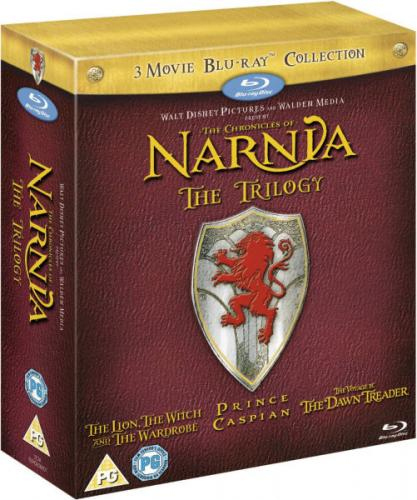 The Lion, The Witch and the Wardrobe
Prepare to enter another world when Walt Disney Pictures and Walden Media present C.S. Lewis' timeless and beloved epic adventure. With the stunningly realistic special effects, you'll experience the exploits of Lucy, Edmund, Susan and Peter, four siblings who find the world of Narnia through a magical wardrobe while playing a game of "hide-and-seek" at the country estate of a mysterious professor. Once there, the children discover a charming, once peaceful land inhabited by talking beasts, dwarfs, fauns, centaurs and giants that has been turned into a world of eternal winter by the evil White Witch, Jadis. Aided by the wise and magnificent lion Aslan, the children lead Narnia into a spectacular, climactic battle to be free of the Witch's glacial powers forever!

Prince Caspian
The magical world of C. S. Lewis' beloved fantasy comes to life once again in Prince Caspian, the second installment of The Chronicles of Narnia series. Join Peter, Susan, Edmund, Lucy, the mighty and majestic Aslan, friendly new Narnian creatures and Prince Caspian as they lead the Narnians on a remarkable journey to restore peace and glory to their enchanted land. Continuing the adventure of The Lion, The Witch and the Wardrobe with more magic and a brand-new hero, Prince Caspian is a triumph of imagination, courage, love, joy and humour your whole family will want to watch again and again.

The Voyage of the Dawn Treader
Lucy, Edmund and cousin Eustace join King Caspian and a noble mouse named Reepicheep aboard a magnificent ship bound for mysterious islands. Soon, they confront mystical creatures and reunite with the mighty Aslan on a mission that will determine the fate of Narnia!

Includes 450 Disney reward points
- wiggywig
PostTweetShare Share with WhatsApp Share with Messenger
Community Updates
The Hut DealsThe Hut Discount Codes
If you click through or buy, retailers may pay hotukdeals some money, but this never affects which deals get posted. Find more info in our FAQs and About Us page.
New Comment Subscribe Save for later
4 Comments
13th Nov 2013
if you use the code it goes under £10 so charges you £1.99 delivery.
13th Nov 2013
Wow - great price for 3 cracking films on blu-ray!
Hot !
13th Nov 2013
Promised never to order from these again.
Ordered. (_;)
13th Nov 2013
Ordered... At £10 as it charges you more for delivery if you use the discount code.