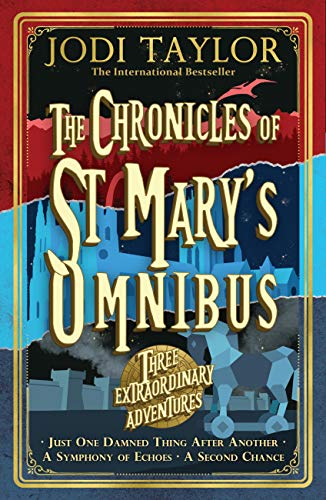 The first three extraordinary adventures in the Chronicles of St Mary's series, now available together in ebook.‌ If you love Jasper Fforde or Ben Aaronovitch, you won't be able to resist Jodi Taylor.

'The Chronicles of St Mary's are the stories of a bunch of time travelling historians who investigate major historical events in contemporary time. Do NOT call it time travel. They are frequently described as "a bunch of tea-sodden disaster magnets", bouncing from crisis to catastrophe and back again. For is it not written, where historians go disaster is sure to follow?' - Jodi Taylor

In these first three novels, meet the disaster magnets of St Mary's as they hurtle their way around History.

JUST ONE DAMNED THING AFTER ANOTHER

When Madeleine Maxwell is recruited by the St Mary's Institute of Historical Research, she discovers the historians there don't just study the past - they revisit it.

But one wrong move and History will fight back - to the death. And she soon discovers it's not just History she's fighting...

A SYMPHONY OF ECHOES

Dispatched to Victorian London to seek out Jack the Ripper, things go badly wrong when he finds the St Mary's historians first. Stalked through the fog-shrouded streets of Whitechapel, Max is soon running for her life.

It began well. A successful assignment to 17th century Cambridge to meet Isaac Newton, and another to witness the historic events at The Gates of Grief. So far so good.

But then came the long-awaited jump to the Trojan War that changed everything. And for Max, nothing will ever be the same again.
PostTweetShare Share with WhatsApp Share with Messenger
Community Updates
Amazon DealsAmazon discount code
New Comment Subscribe Save for later
6 Comments
15th Feb
Great books def worth your 99p for first three in Series .... sadly all the rest are sticking at £5.99 each which I'm.just not prepared to pay
15th Feb

Not read any but bought this omnibus to give them a try
15th Feb
I've listened to all these books through Audible and they are very good. I'd recommend them. Max is a great character, tough, resourceful and flawed. The first story is an origin story describing a post Civil War England in the very near future and how Max becomes involved in the St Mary's shenanigans, all the major players and lots of great B characters are introduced. For 99p it's a no-brainer. If you like the trilogy and want to read the rest read them in order as there is a narrative arc.
16th Feb
Currently listening to the first book on Audible with an hour left and really enjoying it. One or two "really?!" moments but otherwise a great listen. For those interested, various books in the series are on sale regularly to Audible members.
Edited by: "maxcovergold" 16th Feb
16th Feb
I don't like fantasy/sci-fi normally, but I picked this up free about 5 years ago and have been hooked on St Mary's ever since. They are very well written & the level of detail, both historical and in the over arching storyline, is amazing. Why this hasn't yet been snapped up for a film/miniseries script yet is beyond me...
17th Feb

Agreed, I started on this series of books a couple of months ago and think they're fantastic but was wondering why nobody has turned them into a film or TV show yet.