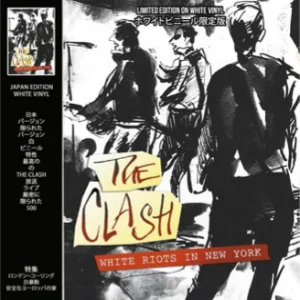 This looks to be a decent price for this vinyl, previous low on Amazon on camelcamelcamel is £14.99. Here's the description from Amazon:

The classic line up of the Clash lasted for five years from 1977 to 1982 and featured lead vocalist and rhythm guitarist Joe Strummer, lead guitarist and vocalist Mick Jones, bassist Paul Simonon and drummer Nicky 'Topper' Headon. Give 'Em Enough Rope, the second studio album, was released on 10 November 1978. The album was a huge success and by 1979 the Clash had begun to make serious inroads into the US market.

White Riots In New York is the legendary Clash broadcast from The Palladium NYC on 21st September 1979. This powerful recording captures The Clash at the peak of their form performing material from Give 'Em Enough Rope and The Clash and their soon to be released third album London Calling.

Featuring Cover Illustrations by Ray Lowry - The Official Clash 'War Artist', who toured with The Clash and sketched them on stage and in rehearsal.

Ordered, thanks
8th Jan
Id be careful with these live japanese lps. The quality of sound is always very dubious. And they arnt really legit Clash releases.