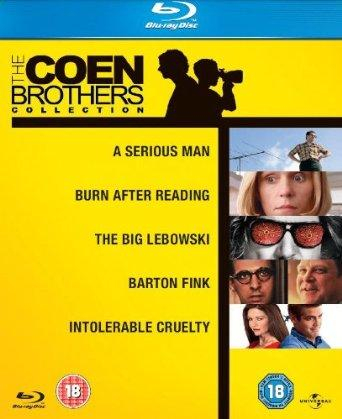 Only once was cheaper, hope it helps someone.

A Serious Man is reference quality, it's got a stunning transfer.
Burn After Reading is another excellent transfer.
Barton Fink is an ok transfer, but understandably doesn't look nearly as good as the 2 already mentioned.

I've not seen the DVD's to compare but those 3 are comfortably better than anything a DVD can produce, especially A Serious Man and Burn After Reading. The Big Lebowski however has a horrible transfer, I doubt it's much of an improvement over the DVD. As for Intolerable Cruelty, I've not yet watched it.
9th Sep 2013
a serious man is carp. i aint a jew so i didnt get half of it. and the other half was just rubbish. terrible choice of films imo. id have gone with raising arizona, hudsucker proxy, oh brother, fargo and big lebowski.
9th Sep 2013

Thanks but was not particularly bothered about Burn After Reading anyway as I regarded it as a mediocre effort. Think I will give this a pass.
10th Sep 2013
Worth it for The Big Lebowski alone
10th Sep 2013
Coming up as cheapest = £12