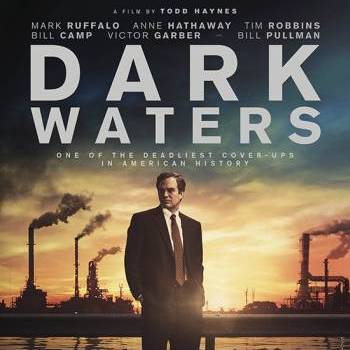 DescriptionWe have an exclusive preview film screening for readers of The Conversation of Dark Waters, the shocking true story of a corporate lawyer who risks his career and family to uncover one of the biggest corporate cover ups of all time and bring justice bring justice to a community dangerously exposed for decades to deadly chemicals. The screening is at 18:30 on Tuesday February 25th at Dolby Cinema in central London, with a drinks reception from 18:00.

Directed by Todd Haynes (Carol, Far from Heaven), Dark Waters (12A) follows corporate environmental defense attorney Rob Bilott (Mark Ruffalo), who finds himself conflicted after he’s contacted by two West Virginia farmers who believe that the local DuPont plant is dumping toxic waste in the area landfill that is destroying their fields and killing their cattle. He files a complaint that marks the beginning of an epic 15-year fight — one that will not only test his relationship with his wife, Sarah (Anne Hathaway) but also his reputation, his health and his livelihood.

The screening will include a drinks reception and Q&A hosted by Conversation editor, Josephine Lethbridge, with chemist Mark Lorch, global systems expert James Dyke, and a representative from Fidra, an evidence-based environmental charity who’ve recently released a report on PFAS (the substance of question in the film) in UK food packaging.

The event is free and the screening is an opportunity for you to see the film before it lands in UK cinemas – and to put your questions to the panel about the widespread chemical pollution that affects us all.

I only heard of this film on Graham Norton Show, where the actual lawyer was in the audience whom this film is based on. I was gobsmacked with his statement that all of us are poisoned with a chemical like Teflon which we use on frying pan. I had heard of teflon being dangerous and stoped all non stick pan and dishes( We had trays with non stick material in which we used to heat/bake products) about 12yrs ago. But I guess the damage has been done.

Wow I never knew there is a story of poisoning behind it. We also stopped using microwaves nearly 20yrs ago. We only keep it to heat the heat pads or something we will not consume.

Worth watching it and hope future generations learn from it and stop using unnatural products and method of cooking.
PostTweetShare Share with WhatsApp Share with Messenger
Community Updates
Eventbrite DealsEventbrite voucher codes
New Comment Subscribe Save for later
16 Comments
17th Feb
Great, thanks OP!
17th Feb
In. Thanks
17th Feb
All gone
17th Feb
WOW! Read a comment from someone who attended a demo at the private Dolby Cinema at Dolby’s HQ in Soho that it was the best cinema audio they had ever experienced at any cinema (private or otherwise).

Can’t wait to experience it myself.

Wow that was quick!
17th Feb

Didnt notice the venue. Nice!
17th Feb
OOS - saw the trailer the other day the girl on the bike smiling with brown teeth!
17th Feb
Worth noting:
As not everyone who asks for tickets uses them we send out a few more tickets than there are places. This means that admission is on a first come first served basis and is not guaranteed.
17th Feb

Wow that was quick!

Wow that was quick!

Went to click and sign in and said yeah this event has sold out! Ah well! Always next time!
17th Feb
If anyone has spare tickets they don’t end up needing, please let me know as would love to attend. Thanks
18th Feb
Great film, how they get away with such things is just staggering.
22nd Feb

Great film, how they get away with such things is just staggering.

One word 'Money' Money makes the world go round

How do you think the others who should be in dock don't even get anywhere near it. (Two very close to home comes to mind innocent until proven guilty)
25th Feb
Thanks Bro. I’m here.
25th Feb

Did any of you two and any partners manage to attend the screening. I was there as well as n15hu who I met at the end. I should have thought of meeting up with you guys too if you made it. Never mind next time.

It was a very good film with the Q&A it was informative. Environment affect from these chemicals is here to stay. I read an article on the way home mentioning these chemicals could be here to stay until the next ice age. Lets spread the good news that the future of earth and its tenants are going to live with what we humans did thousands of years ago in 1960's. How dare we call mice vermin's of the earth.
25th Feb
The deal might have ended but the film is still to be released on Fri so lets spread the word to go and see the film.