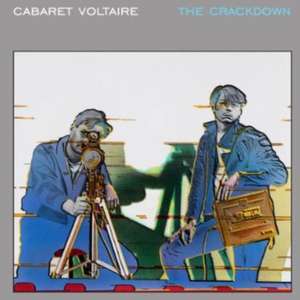 The Crackdown is the fourth studio album by Cabaret Voltaire. It was released in 1983.

This is Cabaret Voltaire's first album after Chris Watson's departure.

For the 2013 edition, the audio had been remastered from the original tapes. Vinyl Cut by Stefan Betke aka Pole.

AllMusic wrote, "One of Cabaret Voltaire's strongest albums, The Crackdown features the band working a number of menacing electronic textures into a basic dance/funk rhythm; the result is one of their most distinctive, challenging records.”

Cabaret Voltaire, alongside Human League, Throbbing Gristle, Fad Gadget and The Normal, were at the forefront of the UK Electronic Movement of the late '70s. Way ahead of their time, Cabaret Voltaire’s blend of dance music, techno, dub, house and experimental made them, without a doubt, one of the most influential acts of the last 35 years.