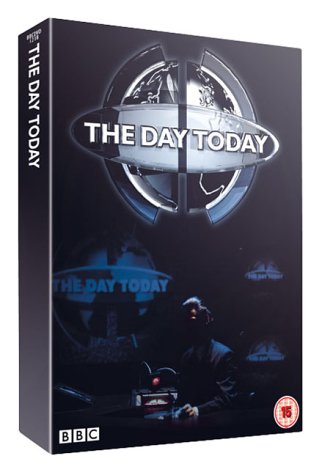 Fab low price for the 2 disc series - can be had cheaper on pre-owned if you prefer it like that.

Description
Fact me till I fart, it's The Day Today, the most outrageously satirical show ever to feature a man called Chris Morris--until Brass Eye, that is. Both savage and surreal, The Day Today heaps great steaming mounds of abuse and scorn upon our self-appointed moral guardians, upon pompous pundits, puerile newspaper headline-writers and vacuous, self-important TV presenters. And they all richly deserve it.

First broadcast in 1994, the show's format is Newsnight-meets-Crimewatch in Hell. A ridiculously protracted title sequence and melodramatic headline announcements introduce Morris' demented, Jeremy Paxman-a-like anchorman, who simpers to the viewers while castigating on-air his useless reporter Peter O'Hanraha'hanrahan. The vacant Collatallie Sisters turns financial news into a Dadaist nightmare of meaningless statistics, graphically illustrated by the currency cat or the finance arse; while American journo Barbara Wintergreen's reports from Death Row are just scary and absurd enough to be completely believable. Also making his TV debut here is Steve Coogan's legendary sports caster Alan Partridge, with his appalling sports reporting, his cringe-inducing misunderstandings and his sheer blunt-headed stupidity (many of the same team, sans Morris, would reunite the following year for Knowing Me, Knowing You). Sketches such as the spoof soap "The Bureau" and the spoof docu-soap "The Pool" also betray the writing skills of Graham Linehan and Arthur Matthews, creators of Father Ted.

On the DVD: The Day Today arrives as a two-disc set with all six episodes on the first disc. The second disc has a handful of fairly brief but still enjoyable extras: here you will find "Mini News" features in full and the complete versions of "The Pool" and "The Office" documentaries--the latter now looking like a brilliant premonition of the more famous Ricky Gervais vehicle. There's a rather dull Open University programme about the craft of TV journalism which uses extracts from The Day Today and is truthfully entitled "Po-Faced Analysis". Best of all is the complete original Pilot episode, plus a marvellous post-programme update in which Morris telephones a befuddled American McDonald's employee as if he was a crewmember of a sunken US submarine. Picture and sound quality are standard for a BBC show from the early 1990s. In summary: dispassionate. --Mark Walker