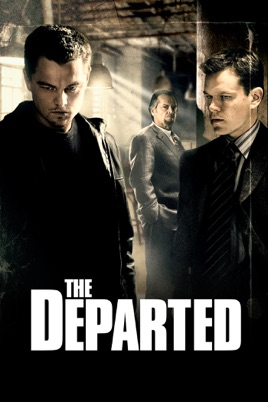 The Departed
Rookie cop Billy Costigan (Leonardo DiCaprio) grew up in crime. That makes him the perfect mole, the man on the inside of the mob run by boss Frank Costello (Jack Nicholson). It’s his job to win Costello’s trust and help his detective handlers (Mark Wahlberg and Martin Sheen) bring Costello down. Meanwhile, SIU officer Colin Sullivan (Matt Damon) has everyone’s trust. No one suspects he’s Costello’s mole. How these covert lives cross and collide is at the ferocious core of the widely acclaimed The Departed. Martin Scorsese directs, guiding a cast for the ages in a visceral tale of crime and consequences. This is searing, can’t-look-away filmmaking: like into the eyes of a con - or a cop - with a gun.


Gangs of New York
Martin Scorsese’s GANGS OF NEW YORK introduces today’s world to the Five Points, a dark corner of the city known to New Yorkers of long ago as the centre of vice and chaos.Into this frontier of extreme lawlessness arrives the young Amsterdam Vallon (Leonardo DiCaprio). Amsterdam is the orphaned son of the slain Priest Vallon (Liam Neeson) – once chief warrior of the Dead Rabbits gang that rallied the Irish immigrants of the Five Points. Amsterdam has returned to the Five Points to hunt down his father’s killer. His target is William Cutting AKA “Bill the Butcher” (Daniel Day-Lewis), who has since become the merciless new leader of the neighbourhood, a Nativist who detests the newly arrived immigrants and is determined to fend off all so-called “foreign invaders.” Amsterdam works his way deep into the Butcher’s inner circle, a world of alternating honour and cruelty from which he can only hope to escape.
PostTweetShare Share with WhatsApp Share with Messenger
Community Updates
ITunes Store DealsITunes Store voucher
If you click through or buy, retailers may pay hotukdeals some money, but this never affects which deals get posted. Find more info in our FAQs and About Us page.
New Comment Subscribe Save for later
13 Comments
17th Nov 2019
Shame not in 4K hdr
17th Nov 2019

Shame not in 4K hdr

They probably will be at some point, in which case you’ll get upgraded for free by iTunes
17th Nov 2019

This is true my friend, apple are great for that hence why I just added credit to my account with 10% extra ready for jan sales!!
17th Nov 2019

Not always, when The Shining came out in 4K on iTunes my HD version didn’t get upgraded.

Same happened with me, the one I’ve purchased is listed as the extended edition, whilst the 4K version isn’t from what I can see
17th Nov 2019
Can anyone confirm if Gangs of New York is in the correct aspect ratio of 2.35:1? I’ve heard that it is in 1.85:1 open matte ratio. Thanks.
17th Nov 2019
Excellent - have been waiting for a price drop on GONY for a while now. Thank you OP!
17th Nov 2019
Class films the pair. A lot of haters for departed seeing as it's a remake but I thought it was brilliant
18th Nov 2019
I want to see the Departed having watched the Asian Original movie it was based on, but I was led to believe it was like those Asian Action films like Hard Boiled, Killers etc.

3 hours of drama with 5 minutes of action.

i don’t mind films like that but I was in the mindset for a wrong type of movie, I got a slow burner when I thought I was gonna see a John Woo Film.

I’m gonna edge towards saying not likely, if you look at the studio/distributor info under iTunes The Departed is a Warner Bros movie and GONY is Miramax which both are distributed by Entertainment Film Distributors in the UK.
Miramax is also a subsidiary of Disney.
18th Nov 2019

Yeah the extended versions don’t get the 4K treatment from the studios, I bought Scarface code from US and that got upgraded recently
19th Nov 2019

this is a Martin Scorsese film... He doesn’t make action films.

Well there’s more action in goodfellas than the asian original film infernal affairs for example.
Thats why i asked